You are here: Home / Blog / Bible study / A New Commandment? 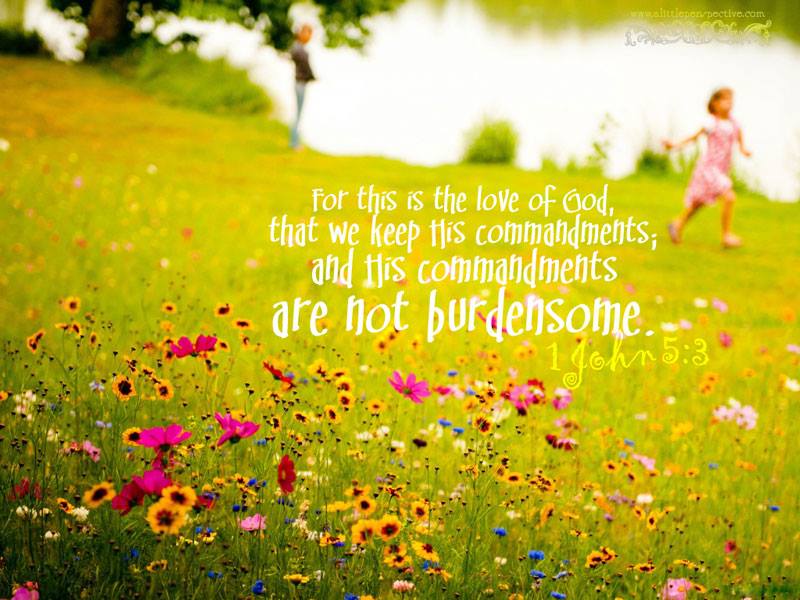 Image courtesy of A Little Perspective

Did Jesus bring new commandments that were different from the ones His Father taught?

Yeshua was speaking to his disciples when He said these famous words:

Why did Yeshua say this was a “new” command, when the Torah taught the same thing?

“Do not seek revenge or bear a grudge against one of your people, but love your neighbor as yourself. I am YHWH” (Leviticus 19:18).

“The alien (GENTILE) living with you must be treated as one of your native-born. Love him as yourself, for you were aliens in Egypt. I am YHWH your God” (Leviticus 19:34).

“For YHWH your God is God of gods and Lord of lords, the great God, mighty and awesome, who shows no partiality and accepts no bribes. He defends the cause of the fatherless and the widow, and loves the alien, giving him food and clothing. And you are to love those who are aliens, for you yourselves were aliens in Egypt” (Deuteronomy 10:17-19).

“Here we see three examples in Torah where we are commanded to love our neighbor… and not just our neighbor but STRANGERS/Gentiles, meaning those who are NOT counted as Israel and grafted in. The oral tradition in the day of Yeshua and Jewish leaders was that you were NOT supposed to talk with or associate with a Gentile. But this is not what Torah teaches. It teaches us we are to be set apart and a light to the nations.”

Yeshua commanded his disciples to go into ALL the world and to preach the gospel. They were to teach (Mark 16:15). They were to make disciples of ALL nations, not just Jews. They were going to have to learn how to love the new believers, even those who were Gentiles and were different than they were. But they were also to teach those new disciples EVERYTHING that He had commanded them (Matthew 28:18-20).

Would He teach them something different than what His Father had commanded?

“Jesus answered, ‘My teaching is not my own. It comes from him who sent me. If anyone chooses to do God’s will, he will find out whether my teaching comes from God or whether I speak on my own. He who speaks on his own does so to gain honor for himself, but he who works for the honor of the one who sent him is a man of truth; there is nothing false about him. Has not Moses given you the law? Yet not one of you keeps the law. Why are you trying to kill me?'” (John 7:16-19)

Our Messiah could do no sin, or else He would be disqualified to be our Savior.

“God made him who had no sin to be sin for us, so that in him we might become the righteousness of God” (2 Corinthians 5:21).

And what is sin?

“What then? Shall we sin because we are not under law but under grace? By no means!” (Romans 6:15)

“To this you were called, because Messiah suffered for you, leaving you an example, that you should follow in his steps. He committed no sin, and no deceit was found in his mouth” (1 Peter 2:21-22).

“Whoever claims to live in him must walk as Jesus did. Dear friends, I am NOT writing you a new command but an OLD one, which you have had since the beginning. This old command is the message you have heard. Yet I am writing you a new command; its truth is seen in him and you, because the darkness is passing and the true light is already shining. Anyone who claims to be in the light but hates his brother is still in the darkness” (1 John 2:6-9, NIV).

“I give you sound learning, so do not forsake my teaching” (Proverbs 4:2).

The word for “teaching” in this verse is the Hebrew word “torah.” It refers to the first five books of the Bible, often called the “law.”

“Your word, O YHWH, is eternal;
it stands firm in the heavens.
Your faithfulness continues through all generations;
you established the earth, and it endures.
Your laws endure to this day,
for all things serve you” (Psalm 119:89-91).

In the time of the early church, the only “Scriptures” they had were the Torah, the “writings,” and the prophets. We would refer to these as the “Old Testament.”

“But as for you, continue in what you have learned and have become convinced of, because you know those from whom you learned it, and how from infancy you have known the holy Scriptures, which are able to make you wise for salvation through faith in Christ Jesus. All Scripture is God-breathed and is useful for teaching, rebuking, correcting and training in righteousness, so that the man of God may be thoroughly equipped for every good work” (2 Tim. 3:14-17).

“I urge you, brothers, to watch out for those who cause divisions and put obstacles in your way that are contrary to the teaching you have learned. Keep away from them” (Romans 16:17).

To summarize, when Yeshua said that His disciples were to love their neighbors as themselves, He was not making up a new law. Rather, He was quoting from His Father’s Torah (teachings), written down in the laws given by YHWH to Moses. The greatest commands of the law, to love God with all our heart and to love our neighbors as ourselves (Deuteronomy 6:5, Leviticus 19:18, Matthew 22:36-40), were nothing new. These laws were the commands upon which all other laws hung. These two commands provided the motive behind all that we do to please our Father.

The power to obey, through the help of the Holy Spirit who now comes to live inside of us, was new — but the commands to be obeyed were the same.

“Do not think that I have come to abolish the Law or the Prophets; I have not come to abolish them but to fulfill them. I tell you the truth, until heaven and earth disappear, not the smallest letter, not the least stroke of a pen, will by any means disappear from the Law until everything is accomplished. Anyone who breaks one of the least of these commandments and teaches others to do the same will be called least in the kingdom of heaven, but whoever practices and teaches these commands will be called great in the kingdom of heaven” (Matthew 5:17-19).

“Remember your leaders, who spoke the word of God to you. Consider the outcome of their way of life and imitate their faith. Jesus Christ is the same yesterday and today and forever” (Hebrews 13:7-8).