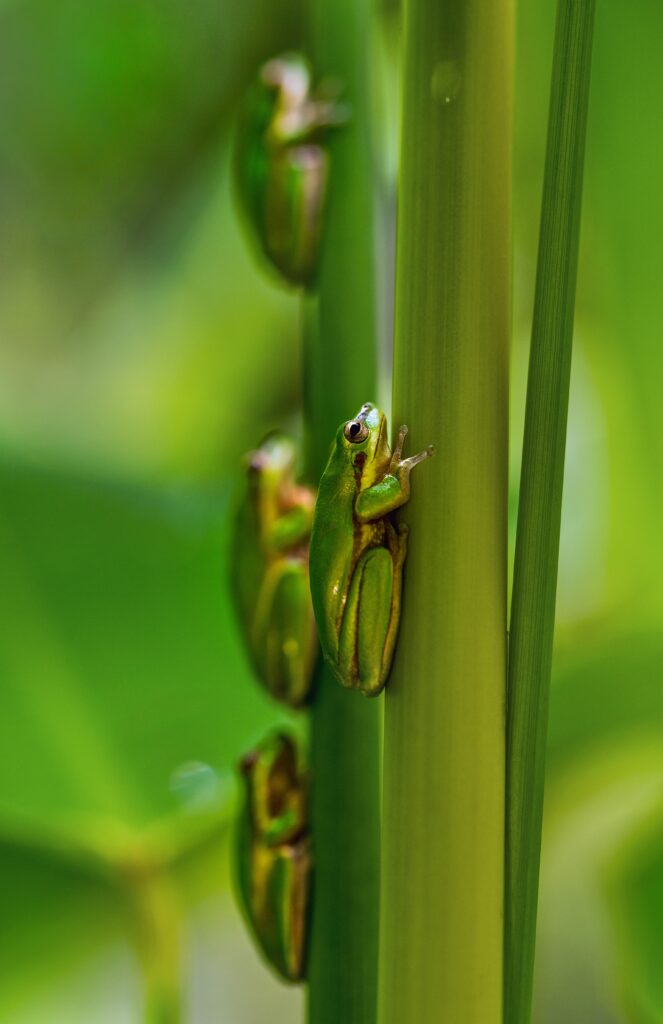 Photo by David Clode on Unsplash

Last week we looked at the three frogs of paganism, humanism, and false religion that are in abundance in our world, our nation, our universities, our schools and churches, our media, and our home — even into our bedrooms because of TV, tablets, computers, phones, music, and more. I urged you to spend time noticing the ways these frogs are speaking into your own home. I thought it might be good to point some of those out, and then we can talk about where this is going in our culture and how it’s prophesied to end.

I’m going to heavily quote Christine Miller’s book Revelation Revealed, which I highly recommend. You can get a printed or e-book version of it here.

The three frogs are mentioned in Revelation 16:13,

Even though the Scripture calls them “frogs” because “the river shall bring forth frogs abundantly, which shall go up and come into your house, into your bedroom, on your bed, into the houses of your servants, on your people, into your ovens, and into your kneading bowls” (Exodus 8:2), it’s important to realize that unclean, demonic spirits are behind these belief systems. You wouldn’t let a demon into your house, would you? But we do, every day.

I never noticed this before, but if we think symbolically, we notice that the frogs were even where bread was prepared. Of course, “man shall not live by bread alone, but by every word that proceeds from the mouth of God” (Matthew 4:4), but if the bread is mixed with frogs…!!!

The first frog mentioned is the unclean spirit that comes out of the mouth of the dragon, which is humanism. According to Christine Miller,

“First, out of the mouth of the dragon: secular atheism, the denial of God’s existence and that He is Creator and Lord. This idea actually has a long history (see The Long War Against God by Henry M. Morris), but it was not an accepted or majority view until the 20th century.”

I like to use the word humanism, because it reminds me that humans are set up as god and worshiped like god.

“Humanism is the belief that man determines truth and that there is no God. Foundational to this religion is evolution and millions of years. If we are simply the result of a chance accident and naturalistic processes over a period of time, as evolution teaches, then there is no God and we are accountable to no one. Man is the authority and man sets the rules—in other words, man is basically his own god! Humanism is the modern equivalent of Satan’s lie to Eve, ‘You will be like God’ (Genesis 3:15). Humanism certainly is a religion, but it’s a religion of godlessness—and therefore meaninglessness and hopelessness.”

Christine gives the following timeline for the rise of humanism:

1859 — publication of The Origin of Species by Charles Darwin gives the ideology of atheism and secularism a scientific foundation.
1917 — Russian Revolution leading to the first establishment of atheism as a national religion since the French Revolution. (How quickly on the heels of the sixth bowl the frog spirits exert their influence!)
1925 — Scopes Trial in America dealt a blow to biblical Creation in the recent past as a truthful idea and opened the door for Darwinism to be taught in public schools.
1939-45 — World War II; Nazi superior race philosophy an outgrowth of Darwinism.
1945 + post war — establishment of secular philosophies and unquestioned acceptance of Darwinism as a scientific explanation in academia.
1960s-70s — revolution of ideology of secularism spreads from the universities and enters mainstream culture.

As Christine mentions, humanist leaders have specifically targeted education and the political realm. You’ll also see it heavily in medicine, the sciences, and the arts.

The second frog mentioned is the unclean spirit that comes out of the mouth of the beast, which is paganism. According to Christine Miller,

“We have already seen that paganism was a foundation of the rebellion against God at the Tower of Babel, and that this rebellion established the pattern to which all the kingdoms of the world adhered who came after it.”

In other words, the Tower of Babel was the beginning of the polytheism, or the worship of a pantheon of gods and goddesses. This is probably a better term to use than paganism, because “most modern sources by persons who consider themselves Neopagans or Pagans interpret the word to have meant ‘rustic,’ ‘hick,’ or ‘country bumpkin’ — a pejorative term. The implication was that Christians used the term to ridicule country folk who tenaciously held on to what the Christians considered old-fashioned, outmoded Pagan beliefs,” according to one pagan website.

While this has probably been true several times in history, the truth in Scripture is that paganism as the worship of many gods and goddesses is actually the most common type of religion throughout history, prevalent in the country but even more so in the cities. This was the religion of the “great” civilizations of Canaan, of Assyrian and Babylon, of Persia, of Greece and Rome, and of all the major urban centers that have come and gone around the globe, whether in the Far East or in the Americas.

One website says that a “concept that has gained wide acceptance in Neopaganist thought is that each person should do what they decide is ‘right,’ with the term being defined as what benefits themselves and causes harm to no other… Common characteristics of all branches of Neopaganism include reverence for surroundings – usually natural, but sometimes urban – and the ability to personally direct material world change through the control of spiritual forces.”

Christine gives the following timeline for the rise of paganism:

1620 — arrival of Puritans in America; Christmas-keeping outlawed as an expression of pagan idolatry.
1850-1900 — Victorian era, the British queen’s German husband introduced Christmas-keeping to the royal family, Victoria’s popularity helped establish Christmas-keeping in America and other British colonies by the end of the 19th century.
1900s — resurgence of Wicca, druidism, neopaganism, feminism, and other expressions of ancient paganism following the dragon’s attacks on biblical veracity; growth of Halloween as a universal cultural holiday in America an expression of its increasing popularity.
1960s-70s — birth of modern Messianic movement within Christianity; return to Sabbath keeping and biblical holidays; paganism of Roman church holidays such as Christmas exposed.

Neopaganism (new paganism) is the form gaining huge followings around the globe, and as Christine mentions, it has deeply infiltrated Christianity, especially in the uses of symbols and holidays like Sunday, Christmas, and Easter, and in mysticism that has crept into every denomination, as well as alternative forms of so-called healthcare, music and entertainment, business and psychology, and again, into the education of our children.

The third frog mentioned is the unclean spirit that comes out of the mouth of the false prophet, which is Islam. According to Christine Miller,

“The third idea proceeds from the mouth of the false prophet. Who is this, for this is the first time he is introduced in Scripture? Traditionally, the church has held that the idea proceeding from the mouth of the false prophet is the ideology of a resurgent and virulent Islam, for he whom the Mohammedans call the prophet, the Scriptures call the false prophet. The great scientist Isaac Newton, looking far forward from his own time, believed that the Ottomans, who were the greatest world power in his day, would one day be defeated, and on its heels, an aggressive Islam would reemerge, even though in his time it was generally a mild, liberal, and tolerant religion. He based his opinion on the 16th chapter of Revelation!

This is so remarkable, because today we see this very thing — the resurgence of a virulent and aggressive Islam on the heels of the defeat of the Ottoman empire! In fact, these are the three ideologies: secularism and atheism, neopaganism (even in its expressions of Babylonian religion by the Roman church), and virulent Islam, which are waging war upon the two witnesses today, both in the natural world and the spiritual!

When Christine says it is “virulent,” she means bloody and violent. Yet despite its violence, you will hear the frogs telling us to be peaceful, to trust them, and to hate God’s people Israel instead…

Next week we’ll talk about how to clean out the frogs in our homes, as well as what God says is the reason they are infiltrating in the first place — and how this plague will finally end.