You are here: Home / Blog / Bible study / Keep Calm and Wait for the King 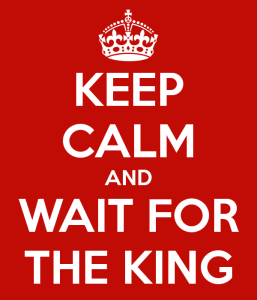 I’ve been thinking a lot lately about the purpose of my life. Yeah, I know. Deep stuff. 🙂

Seriously, though, I can just go about my tasks each day — homeschooling, cooking, laundry, errands, phone calls — and days slip by without ever feeling like I’m going anywhere.

My heavenly Father has granted me only a certain number of days. Even further, He has a specific job for me to accomplish during my time here on earth.

I’m just a mom, so these lofty words sometimes don’t feel like they apply to me. Yet as a disciple of Jesus, they do! He wants me to help build His kingdom.

The State of the Kingdom

I don’t make it a practice to say much about politics, but things are a little depressing in our world right now.

Here in America, the economy is looking worse and worse all the time. Farmers nearby our town are losing their crops this year from record droughts. The corn is standing in the fields, scorched and wilted, and people whisper that grocery prices will only continue to climb.

On the political scene, we have no clear candidates that we can trust to lead our country toward godliness. Not even remotely! An important election is coming closer, but our religious freedoms continue to slip away.

As for morality, each day makes it more obvious that “Judeo-Christian ethics” are a thing of the past. Belief in creation, in the inerrancy of Scripture, and in definitions of sin are attacked and belittled. We’re told to be tolerant of evil, but we’re ordered to be silent about righteousness.

It feels like the Kingdom is crumbling around us!

The Location of the Kingdom

Hold everything, Folks! Just where is God’s Kingdom, anyway?

Okay, I think it would be fair to say that all the earth is God’s kingdom.

We also realize that the Prince of the Power of the Air (Ephesians 2:2) has captured the hearts and minds of mankind, who have revolted against their King.

We also know that the King is coming, and His Kingdom will one day fill the earth again.

“In the time of those kings, the God of heaven will set up a kingdom that will never be destroyed, nor will it be left to another people. It will crush all those kingdoms and bring them to an end, but it will itself endure forever” (Daniel 2:44).

While His kingdom will fill the earth, we see that the capital will be Jerusalem, in the physical nation of Israel.

“Great is the Lord, and greatly to be praised
In the city of our God, in His holy mountain.
Beautiful in elevation,
The joy of the whole earth,
Is Mount Zion on the sides of the north,
The city of the great King” (Psalm 48:1-2, NKJV).

Looking at history for a moment, we see that the people of Israel were scattered and dispersed from their homeland. God warned them  that if they continued to worship false gods, He would scatter them “among all nations, from one end of the earth to the other” (Deuteronomy 28:64). Beginning around 740 B.C., when the Assyrian armies conquered the ten northern tribes of Israel, and continuing until the horrific fall of Jerusalem in A.D. 70, God’s chosen people were carried away to the ends of the earth.

Yet in God’s grace and mercy, even through the darkness of sin, rebellion, and punishment, God chose to use this dispersion to bring in the “Church Age,” the age when He would call out His own from every tribe and nation. (Remember that “church” comes from the Greek word ecclesia, which means called-out ones.)

“In him we [Israelites] were also chosen, having been predestined according to the plan of him who works out everything in conformity with the purpose of his will, in order that we, who were the first to hope in Christ, might be for the praise of his glory. And you [Gentiles] also were included in Christ when you heard the word of truth, the gospel of your salvation” (Ephesians 1:11-13).

The first disciples were scattered across the earth, partly from persecution and also from obedience to take the gospel to all creatures (Mark 16:15). As they were obedient, the gospel spread from Palestine, west and east, north and south.

And here we are today. Here in America, on the other side of the earth, the Elliott family was given the good news. The light reached into your home, too.

The Purpose of the Kingdom

“For we are God’s workmanship, created in Christ Jesus to do good works, which God prepared in advance for us to do” (Ephesians 2:10).

So what is my purpose? Why am I here on earth? The Scriptures say that God prepared work in advance for me to do!

For years, I loved a verse in Jeremiah — yet I wasn’t sure how or if it really applied to my life.

“For I know the plans I have for you,” declares YHVH, “plans to prosper you and not to harm you, plans to give you hope and a future” (Jeremiah 29:11).

Recently, I noticed the context of this passage. Through His prophet Jeremiah, God instructed the people of Israel how they were to act when they were dispersed into a foreign land:

“This is what YHVH Almighty, the God of Israel, says to all those I carried into exile from Jerusalem to Babylon: ‘Build houses and settle down; plant gardens and eat what they produce. Marry and have sons and daughters; find wives for your sons and give your daughters in marriage, so that they too may have sons and daughters. Increase in number there; do not decrease. Also, seek the peace and prosperity of the city to which I have carried you into exile. Pray to the Lord for it, because if it prospers, you too will prosper.’ Yes, this is what YHVH Almighty, the God of Israel, says: ‘Do not let the prophets and diviners among you deceive you. Do not listen to the dreams you encourage them to have. They are prophesying lies to you in my name. I have not sent them,’ declares YHVH.

“This is what YHVH says: ‘When seventy years are completed for Babylon, I will come to you and fulfill my gracious promise to bring you back to this place. For I know the plans I have for you, declares YHVH, ‘plans to prosper you and not to harm you, plans to give you hope and a future. Then you will call upon me and come and pray to me, and I will listen to you. You will seek me and find me when you seek me with all your heart. I will be found by you,’ declares YHVH, ‘and will bring you back from captivity. I will gather you from all the nations and places where I have banished you,’ declares YHVH, ‘and will bring you back to the place from which I carried you into exile.'” (Jeremiah 29:4-14).

The writer of Hebrews tells us that, like Abraham, we also are strangers in a foreign land.

“By faith he made his home in the promised land like a stranger in a foreign country; he lived in tents, as did Isaac and Jacob, who were heirs with him of the same promise. For he was looking forward to the city with foundations, whose architect and builder is God” (Hebrews 11:9-10).

Jeremiah tells me that I am to “seek the peace and prosperity of the city to which I have carried you into exile,” which is the United States for me. When America prospers, I’ll prosper, too.

However, I am not to forget my homeland, the Kingdom of God. I am to call upon YHVH and pray to Him, seeking him with all my heart. I have been released from the captivity of sin, and I follow a new King now.

The Commission of the King

Matthew 28:18-20 has been called the “Great Commission,” a title I really appreciate.

My Father has given me a commission to build His Kingdom. Building His kingdom is not having a large family, homesteading in the back woods somewhere, or converting all my friends to homeschooling.

Rather, building His kingdom means making disciples of all nations.

Each day as I wake up, may I pray as Jesus did,

Then I’ll get up and get to work!