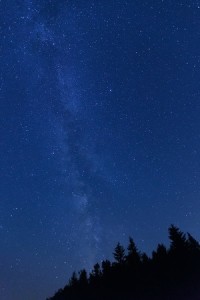 When is the last time you went out on a very dark, very clear night, and looked up at the stars? The longer you stare at the blackness, the more your eyes adjust. You are pulled into the majesty of galaxies far away.

And if you believe the Scriptural record of creation, your mind starts to ponder how small you are – and how enormously wise and big and beyond comprehension your Creator is!

So when is the last time you stopped the frantic pace of your life to do just that?

It’s as if, as the sixth day of our world was ending, God Himself looked at “all the host” of the stars He had made, and then swept His eyes down to the earth, to the vastness of the animal kingdoms, to the depths of the deepest oceans, and to the crowning achievement of creation, the man and woman whom He had made to look just like Himself.

And He sighed a wonderful sigh of joy. It was very good.

As the sun set, shining glorious light over the lush garden, He ceased from His work. He had utterly accomplished everything, and He completely stopped.

The Hebrew word for rest is shabbat, pronounced “shah-BAHT.” It means to cease, to cause to stop, to put away, and to celebrate completion.[1]

He blessed this day of resting. To bless is to bestow YHVH’s favor and goodness on something, and on this Shabbat, He spoke a benediction. Only good could come of it. Life, joy, peace.

He also made this day holy. He sanctified it. He consecrated it. He set it apart for a very special purpose.

In 2006, I read through my Bible very quickly from beginning to end, frantically searching for answers to a list of questions I had. How could I have a good marriage? How could I be a good mother? How could I keep my children from leaving the church when they grew up? How could I figure out what right and wrong was, especially when there were so many differing opinions?

I felt like huge chunks of the Bible didn’t even apply to me. I knew there were sections I had never read, but they felt boring. I was starting to feel like Christianity was all a bit hoax.

One late night, I made a decision that changed my life. I decided to read through my entire Bible as if it were written to me personally. If I got all the way to the end and still felt as if it were confusing and contradicting, I would give it up and become an atheist, just enjoying life for once, living it however I wanted. 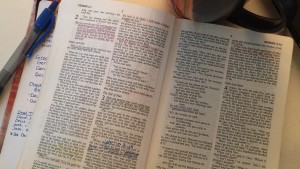 My Bible Marked Up

I started in Genesis 1. I kept a red pencil in my hand as I read, and I marked things that stood out to me.

I marked Genesis 1:14 because it was intriguing to me, but I wasn’t sure what it meant.

“And God said, ‘Let there be lights in the vault of the sky to separate the day from the night, and let them serve as signs to mark sacred times, and days and years'” (Genesis 1:14, NIV).

I remember sitting for a moment and trying to let its meaning sink in. I remember feeling loved, like maybe my life counted for something. I hoped that I would learn more about this in the pages ahead.

My next marking was in Genesis 2.

I was exhausted. I had been working seven days a week, for months. Years, maybe. I was very involved in ministry in my local church, I had five young children, I homeschooled them, I had written a book, I frequently spoke at women’s conferences, I played piano for a local theatre group and taught piano lessons.

I just wanted to crawl up in a little ball and sleep for years. I felt like I was good at starting to create things, but unlike God, I never seemed to finish what I’d started.

As a Baptist, I was not accustomed to taking a day off each week, but as I held my red pencil in my hand and underlined these words, I decided I would start taking off each Saturday just to put my feet up and rest. I didn’t want to tell anyone, for fear they would say I was trying to put myself back under the law, but inside, I was eager to see why God had blessed this day and had set it aside for a special reason.

If the Bible was written to me personally, this was as good of a place to start as any.

In the book of Ecclesiastes, King Solomon – the wisest and richest king who ever lived – tells how even wealth and fame, lovers and palaces, could only bring depression and emptiness. Nothing satisfied, at least not for long.

“I, the Preacher, was king over Israel in Jerusalem. And I set my heart to seek and search out by wisdom concerning all that is done under heaven; this burdensome task God has given to the sons of man, by which they may be exercised. I have seen all the works that are done under the sun; and indeed, all is vanity and grasping for the wind” (Ecclesiastes 1:12-14).

At the end of his book, he gives final advice to the young men:

“Remember now your Creator in the days of your youth” (Ecclesiastes 12:1).

When life gets busy and the cares of this world increase, we forget our Creator. Listen to some of these other warnings from Scripture:

“And take heed, lest you lift your eyes to heaven, and when you see the sun, the moon, and the stars, all the host of heaven, you feel driven to worship them and serve them, which YHVH your God has given to all the peoples under the whole heaven as a heritage” (Deuteronomy 4:19).

“[Let there not be found among you] a man or a woman who has been wicked in the sight of YHVH your God, in transgressing His covenant, who has gone and served other gods and worshiped them, either the sun or moon or any of the host of heaven, which I have not commanded” (Deuteronomy 17:2-3).

“For the wrath of God is revealed from heaven against all ungodliness and unrighteousness of because what may be known of God is manifest in them, for God has shown it to them. For since the creation of the world His invisible attributes are clearly seen, being understood by the things that are made, even His eternal power and Godhead, so that they are without excuse” (Romans 1:18-20).

God has revealed Himself in His creation – and it’s shown to every human on the face of the earth, if we’ll but look.

However, the cares of this world creep in and steal our focus away from God.

We wish upon a star, rather than seek the Creator of the stars.

“By the word of YHVH the heavens were made, and all the host of them by the breath of His mouth” (Psalm 33:6).

“But now ask the beasts, and they will teach you; and the birds of the air, and they will tell you; or speak to the earth, and it will teach you; and the fish of the sea will explain to you. Who among all these does not know that the hand of YHVH has done this, in whose hand is the life of every living thing, and the breath of all mankind?” (Job 12:7-10).

“I have made the earth, and created man on it. I—My hands—stretched out the heavens, and all their host I have commanded” (Isaiah 45:12).

Over twenty-five hundred years after Creation,[2] the Sabbath had been forgotten. In the hearing of all the Israelites gathered at the base of Mount Sinai, with thunder and lightning and smoke, God gave a commandment to His people.

“Remember the Sabbath day, to keep it holy.

“For in six days YHVH made the heavens and the earth, the sea, and all that is in them, and rested the seventh day. Therefore YHVH blessed the Sabbath day and hallowed it” (Exodus 20:8-11).

YHVH doesn’t want us to forget the Sabbath day, or we will forget that He made everything. When we forget our Creator, we will turn to idols instead.

It’s as if He has presented a choice before His creation. “Stop once a week (as I, your God have commanded) and remember that I am the One and Only God, your Maker — or worship idols, who can neither breathe nor speak nor stand.”

It’s one or the other. You have to choose.

[2] According to Ussher, the Ten Commandments were given to Israel from Mount Sinai in 1491 B.C.

« Food Offered to Idols
Sabbath, the Sign of the Covenant »