You are here: Home / Blog / Priorities / Parenting / Homeschooling / Bible Curriculum That Is Anti-Bible? 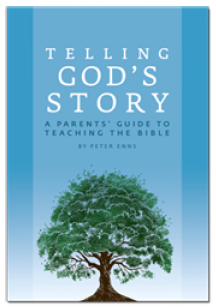 Several weeks ago, I first heard about a Bible curriculum by Peter Enns, published by Peace Hill Press, the publishing arm of The Well-Trained Mind. Since so many homeschoolers are “classical” in style, this really made my ears perk up. I read about this curriculum by reviewer LeaAnn Garfias, in a blog post entitled “Home Educating in Biblical Truth.”

What I read at LeaAnn’s blog really frustrated me. It felt like Peter Enns wrote a Bible curriculum that looks good at first but then quietly attacks the core foundations of all that God’s Word teaches. According to LeaAnn, Mr. Enns claimed that sin and grace are too difficult for children to understand, so they shouldn’t be discussed until at least the teenage years. In addition, he took a very weak stance on the inspiration or authority of Scripture. He even questioned whether the creation story was true and hinted that it didn’t really matter.

Later, I received my latest issue of The Old Schoolhouse magazine. I was very surprised to find a full-page ad for Peter Enns’ Bible curriculum sandwiched between two extensive articles on creation. I wondered if its placement in the magazine might make it look like Peter Enns would actually agree with the articles that were presented from a young-earth viewpoint.

I decided to buy Peter Enns’ book, Telling God’s Story: A Parent’s Guide to Teaching the Bible, so I could read what he had written with my own eyes. I didn’t feel it would be fair to just take LeaAnn’s word for it. I needed to evaluate his words for myself, especially since we also publish Bible curriculum and might be asked about our “competitor.”

I’ll be honest. I felt like LeaAnn was too kind! It is not my normal policy to attack other authors here on my blog, and I’m not meaning to attack this author personally either. However, I can confidently say that his book is not biblical. I’m deeply concerned about this Bible curriculum!

For instance, Mr. Enns repeatedly attacks the very truth of the Bible. He implies, for instance, that teaching about creation and the flood will just confuse our children, especially when they learn in their other studies that many cultures around the world have similar creation and flood stories. He implies that the Old Testament is very confusing and difficult to understand, and that the laws of God are antiquated and for another time and culture. He suggests that the very core doctrines of our faith are too difficult to discuss with our children, and that we will know it’s time to start discussing them when our teenagers can discuss the tough issues they see in PG-13 movies! Finally, he suggests that Christians should not just look to the Bible for answers, but that we should look to our “communities of faith” to discuss matters of doctrine, as if church dogma is the final authority.

Honestly, this book was much, much worse than I imagined. Again, I’m sorry if I’m attacking another believer, but this is one of the most dangerous books I’ve read in a long time.

So who is right? Is it ever right to criticize another believer? Is it right to stick up for the truth of God’s Word, even when we must “judge” another believer to do so? Just because the “Christian church” has never been agreed about whether creation is literally true or not, does this mean that we should all just “agree to disagree”?

No way, Ladies! Of course, not everyone will agree that the Bible is literally true. It doesn’t matter if the majority of Christians believes something or not. What does the Bible say? That must be our only authority.

“I am not ashamed of the gospel, because it is the power of God for the salvation of everyone who believes: first for the Jew, then for the Gentile. For in the gospel a righteousness from God is revealed, a righteousness that is by faith from first to last, just as it is written: ‘The righteous will live by faith.’ The wrath of God is being revealed from heaven against all the godlessness and wickedness of men who suppress the truth by their wickedness, since what may be known about God is plain to them, because God has made it plain to them. For since the creation of the world God’s invisible qualities—his eternal power and divine nature—have been clearly seen, being understood from what has been made, so that men are without excuse. For although they knew God, they neither glorified him as God nor gave thanks to him, but their thinking became futile and their foolish hearts were darkened. Although they claimed to be wise, they became fools…” (Romans 1:16-22, NIV).

As for judging others, the apostle Peter himself writes some pretty strong words about those who teach “destructive heresies,” such as claiming that the flood is just a myth. (Read 2 Peter 2 and 3.) Compared to how Peter writes about teachers who were contemporary to him, I think Ken Ham has been quite kind to Peter Enns.

Other curriculum companies, such as Sonlight, refuse to take a strong stand on the Bible’s young-earth, seven-day, literal creation account as well. Behind the scenes, many curriculum publishers are discussing whether we writers should offer Christian homeschooling curriculum in “secular” versions as well, to appeal to an ever-growing secular, evolutionary-loving market. After all, the argument goes, one size does not fit all. Many publishers believe in offering a curriculum that leaves plenty of room for the parents to add in their beliefs or to explain a variety of beliefs. They claim that if we are too “dogmatic,” we are showing disrespect to parents.

What about showing respect to God and His Word? What about realizing that we will someday stand before God and must give an account for how we taught the children He entrusted to us?

“But if anyone causes one of these little ones who believe in me to sin, it would be better for him to have a large millstone hung around his neck and to be drowned in the depths of the sea” (Matthew 18:6, NIV).

I know this post is not my typical kind of post here. But again, I’m deeply concerned about the direction of homeschooling and of curriculum publishers. Be on guard as you purchase curriculum this summer and as you attend conferences and seminars! A battle for the minds of our children is certainly raging. Speak up by writing to these curriculum publishers and authors, and let your voice be heard!

« Tidbits of Truth for Homeschooling
How Excellent Is Thy Name (Psalm 8:1) »