You are here: Home / Blog / Bible study / These Are the Days of Elijah… (a post for mothers) 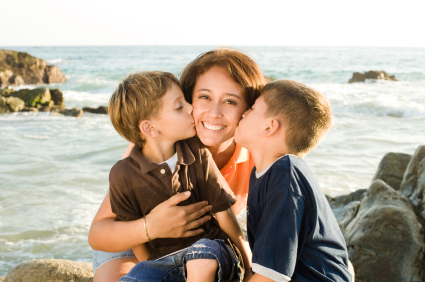 In the excellent parenting book, “Don’t Make Me Count to Three!”, author Ginger Plowman compares my job as a parent with John the Baptist. (She calls us “Joan the Baptist,” LOL!) Why does she do that?

Yeshua says, in Matthew 11:14, that John was “the Elijah who was to come.” Who was Elijah the prophet?

“See, I will send you the prophet Elijah before that great and dreadful day of YHVH comes. He will turn the hearts of the fathers to their children, and the hearts of the children to their fathers; or else I will come and strike the land with a curse” (Malachi 4:5-6, NIV).

The second Elijah, then, will also confront sin and call Israel back to the true worship of God. Malachi 4:5-6 tells us:

Luke 1:13-17 says that John the Baptist (Baptizer) was the “Elijah” mentioned in Malachi. This is repeated in

But how confusing! Read this:

Now this was John’s testimony when the Jews of Jerusalem sent priests and Levites to ask him who he was. He did not fail to confess, but confessed freely, “I am not the Christ.”

Finally they said, “Who are you? Give us an answer to take back to those who sent us. What do you say about yourself?”

John replied in the words of Isaiah the prophet, “I am the voice of one calling in the desert, ‘Make straight the way for YHVH.’ ” (John 1:19-23, NIV)

The only way I can reconcile this passage with the words of Yeshua saying that John the Baptist WAS Elijah (Matthew 11:14), is to say that John wasn’t Elijah literally, in the flesh. However, it certainly confused the Jewish leaders and still does to this day. Even at Passover, it’s traditional to set a chair for Elijah, who is to come before the Messiah. However, we know from Matthew and Luke that John the Baptist was like Elijah and is the one referred to as coming before the Messiah (which is why the Elliotts do NOT set out a chair for Elijah at Passover. He has already come… and so has our Messiah!)

I think that God did not intend for all of the Jews to understand who John was, or else they might have truly understood that Yeshua was their Messiah:

The disciples came to him and asked, “Why do you speak to the people in parables?”

He replied, “The knowledge of the secrets of the kingdom of heaven has been given to you, but not to them. Whoever has will be given more, and he will have an abundance. Whoever does not have, even what he has will be taken from him. This is why I speak to them in parables:

For this people’s heart has become calloused;
they hardly hear with their ears,
and they have closed their eyes.

Otherwise they might see with their eyes,
hear with their ears,
understand with their hearts
and turn, and I would heal them.’

But blessed are your eyes because they see, and your ears because they hear. For I tell you the truth, many prophets and righteous men longed to see what you see but did not see it, and to hear what you hear but did not hear it. (Matthew 13:10-17)

Now, what does any of this have to do with us as mothers?

Wow, ever have one of those times when you are amazed by God’s timing? (I know you do!) I’ve been reading a great book, Don’t Make Me Count to Three, by Ginger Plowman (I’ve written a review for it on my blog), and I saw this quote, having to do with “Elijah”:

Besides the Proverbs 31 woman, I view my responsibility as being most like that of John the Baptist. Let me explain. We as parents are given the awesome responsibility of standing in the gap for our children. Before they surrender to the Lordship of God and come under His authority, they are sovereignly under the only authority they know — their parents. This divine era places us in the gap between God and our children. God has called us to be “John the Baptist” for our children. In obedience to the call of God, John devoted his life to preparing the way for Jesus. God used John’s words and actions to help prepare those whom Jesus would later call to Himself.In the same way, God has entrusted us to prepare the hearts of our children for the Savior. We are tools used by God to whittle away the calluses of the heart, keeping the heart tender and inclined to obedience. When we call our children to obey us, we are preparing them to obey Jesus, which is our ultimate goal. When they accept Jesus and surrender to His Lordship, they find it easier to heed His commands because they are already in the habit of obeying. Let’s go before the Lord just as John the Baptist did and “prepare the way.”  (Don’t Make Me Count to Three! by Ginger Plowman, p. 75.)

This is really cool! John prepared the way for the Messiah by calling people to repent, just as the first Elijah called for Ahab and the people of Israel to turn to the true God from their sin. We prepare our children’s hearts for the Messiah by showing God’s Word to them and calling them to repent when they sin. We can’t force them to accept Christ, but we prepare their hearts to do that by constantly “prophesying” God’s Word to them and helping them turn to Him in repentance. This is the essence of a parent’s job! I think that’s why Malachi says,

And why Isaiah says,

Very cool. May I be a good “Joan the Baptist”!