You are here: Home / Blog / Bible study / Revelation, Wise Virgins… and What to Do About It 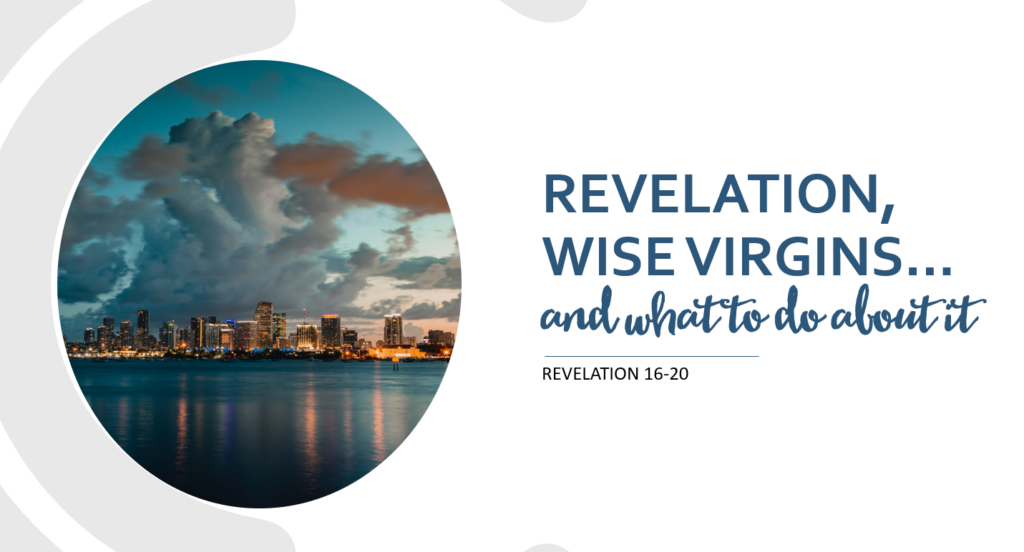 Over the past two weeks, I have been trying to put together my views on the current Coronavirus situation and how it could relate to the book of Revelation. (You can refer to my previous post about Coronavirus and the times we are currently living in here.)

I am not trying to be a prophet but simply to study out Scripture and evaluate our culture according to what it teaches.

“The secret things belong to YHVH our God, but those things which are revealed belong to us and to our children forever, that we may do all the words of this Torah” (Deuteronomy 29:29).

Several years ago, I was first introduced to a view of the book of Revelation called the “historicist” view, which simply means that the events foretold in the book would be revealed over the remaining periods of history, from the writing of the book by John until Yeshua returns to set up His heavenly kingdom at the end of time.

I had always been taught a “futurist” view of Revelation, that all of the prophecies it contains will be fulfilled in a yet-future time, usually over seven years. However, there are numerous problems with that view, especially if we believe that all Scripture needs to be interpreted according to a Torah perspective rather than through a view that removes Israel from the promises of God.

When we see how God wrote down the history of the modern world in the book of Revelation, and how it has been fulfilled accurately and completely, all the way up until our current times, our faith in the providence and wisdom of God is greatly strengthened.

When we realize that God revealed the future (which is the past from our current spot in time), we just stand amazed! However, why is it so amazing? Would He be God if He didn’t have this ability?

“Who has ascended into heaven, or descended?
Who has gathered the wind in His fists?
Who has bound the waters in a garment?
Who has established all the ends of the earth?
What is His name, and what is His Son’s name,
If you know?

“Every word of God is pure;
He is a shield to those who put their trust in Him.
Do not add to His words,
Lest He rebuke you, and you be found a liar” (Proverbs 30:4-6).

The current Coronavirus “plague” that is affecting the entire world seems to fit the prophecies of Revelation, which is why I am writing this blog post today.

However, it’s important to remember not to use Revelation to predict the future dogmatically.

Isaac Newton, who was a staunch defender of the historicist view of Revelation, wrote the following:

“The folly of Interpreters has been, to foretell times and things by this Prophecy, as if God designed to make them Prophets. By this rashness they have not only exposed themselves, but brought the Prophecy also into contempt.” (Isaac Newton, Observations Upon the Prophecies of Daniel and the Apocalypse of St. John, p. 251. Read more here…)

I don’t wish to bring the book of Revelation “into contempt” by misinterpreting what is happening in our current events, but I do hope to convince you to be ready for the return of Yeshua.

Revelation, Wise Virgins… and What to Do About It

This first video concentrates on the prophecies of Revelation 16-20. I urge you to be a “wise virgin” and have “oil in your lamp.”

This second video was made to answer some of the questions we received about the book of Revelation. This video will help if you are not familiar with the historicist view.

We received quite a few questions about the Second Exodus, which I refer to in the above videos. I have made a third video to cover this important topic.