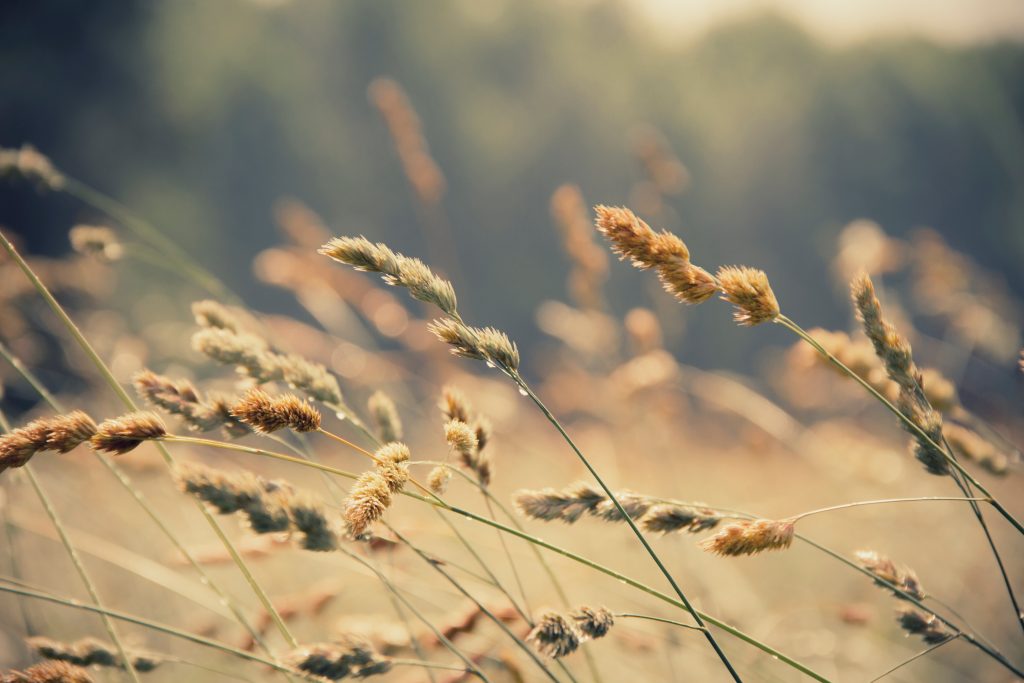 Photo by Matt Hoffman on Unsplash

Good morning! As I read through these passages, my imagination turned on, and I could picture myself as part of the congregation of Israel, as they stood in front of the newly finished Tabernacle, watching as Moses consecrated Aaron and his four sons to be priests. I think it would have felt much like the coronation or wedding of royalty of England. If television or tabloids had been invented, it would have been all over them.

As the holy anointing oil was used for the first time, and as the animals were burnt in the fires of the new altar, and as the grain offerings were waved, the aroma of barbecue mixed with frankincense and other oils would have drifted into the air.

“Then Moses brought Aaron and his sons and washed them with water” (Leviticus 8:6).

Aaron and his sons were immersed in water, which is the meaning of the word washed here. The Hebrew word is rachatz, (רָחַץ or Strong’s #7364), and it comes from the root word רח, meaning to follow a prescribed path. I like what Jeff Benner says in his Ancient Hebrew Lexicon:

The responsibilities of the nomad outside of the tent include the feeding, watering and caring for the livestock. Livestock are healthier and more productive when on a routine, therefore the man follows a routine or “a prescribed path” each day when caring for his livestock.

Isn’t it interesting that beginning one’s service for the YHVH starts with being cleansed?

“But in a great house there are not only vessels of gold and silver, but also of wood and clay, some for honor and some for dishonor. Therefore if anyone cleanses himself from the latter, he will be a vessel for honor, sanctified and useful for the Master, prepared for every good work” (2 Timothy 2:21).

Moses told Aaron and his four sons to “stay at the door of the tabernacle of meeting day and night for seven days, and keep the charge of YHVH” (Leviticus 8:35). To “keep the charge” is to be a sentry who watches over his post. As Benner says, this doorkeeper of the tabernacle would have immediate control, carefully watching over what went in or out.

Aaron and his sons were given authority, but it was preparation “for every good work,” because in Leviticus 9, Aaron was then given an opportunity to start doing what only Moses had done to this point — to offer all the sacrifices and to bless the people of Israel. He moved from apprentice to practitioner, one who practices what he has observed in others and been carefully taught.

In Leviticus 9:22-23, Aaron and his sons began their ministry by blessing all the congregation of Israel. The passage talks about how they raised their hands and pronounced a specific blessing over them (Numbers 6:22-26), but it does not mention that they shaped their fingers into the Hebrew letter shin (ש). This is a rabbinic addition with roots in kaballah.

However, please do note that they lifted up their hands to bless the people. I don’t think there is some mystical force being called down here, but rather, the hands are pictures of our ability to perform work. As Benner says about hand (Strong’s #3027), “the hand is the part of the body that enables man to perform many works.” Throughout the Scriptures, when someone lifts their hand or lays their hand upon another, the picture is that action is beginning and is going to be transferred to that person. Here are some examples:

Yeshua said, “And you are witnesses of these things. Behold, I send the Promise of My Father upon you; but tarry in the city of Jerusalem until you are endued with power from on high.” And He led them out as far as Bethany, and He lifted up His hands and blessed them. (Luke 24:48-50)

“I desire therefore that the men pray everywhere, lifting up holy hands, without wrath and doubting” (1 Timothy 2:8).

Aaron and his sons were given great responsibility in these chapters, but they were passing along a lot of the blessing and responsibility to the entire nation.

“‘You have seen what I did to the Egyptians, and how I bore you on eagles’ wings and brought you to Myself. Now therefore, if you will indeed obey My voice and keep My covenant, then you shall be a special treasure to Me above all people; for all the earth is Mine. And you shall be to Me a kingdom of priests and a holy nation.’ These are the words which you shall speak to the children of Israel” (Exodus 19:4-6).

Yes, the nation had lost the privilege of being a “kingdom of priests” because of the idolatry of the golden calf (Exodus 32:28-29), but they were still be to a “holy nation.” They were still a “special treasure.”

And so eight days of their consecration went by — and then disaster struck! Two of Aaron’s sons offered “strange” or profane fire, which He had not commanded (Leviticus 10:1). When we “add to or take away” from the commands of YHVH, we are disobedient (Deuteronomy 4:2, 12:32).

The word strange (Strong’s 2114) means separated or scattered. It’s very interesting that this word is a picture from “when the grain is squeezed the seed inside comes out,” as when wheat is threshed and the chaff is separated from the grain. Just as chaff is burned in the fire because it is useless, the fire of YHVH came out and devoured Aaron’s two sons.

“So fire went out from YHVH and devoured them, and they died before YHVH.

“And Moses said to Aaron, ‘This is what YHVH spoke, saying:

“By those who come near Me
I must be regarded as holy;
And before all the people
I must be glorified”‘” (Leviticus 10:2-3).

Remember what we read in Luke earlier this week?

“[Yeshua’s] winnowing fan is in His hand, and He will thoroughly clean out His threshing floor, and gather the wheat into His barn; but the chaff He will burn with unquenchable fire” (Luke 3:17).

This happened because the “doorkeepers” (Aaron and his sons) who had charge of the tabernacle were lax on the job. Some commentators think they got drunk while eating the delicious offerings that were their portion (Leviticus 10:13), because this incident is immediately followed with instructions to the priests about drinking on the job. Please note that elders in local congregations are also under this warning (1 Timothy 3:3, Titus 1:7).

“Do not drink wine or intoxicating drink, you, nor your sons with you, when you go into the tabernacle of meeting, lest you die. It shall be a statute forever throughout your generations, that you may distinguish between holy and unholy, and between unclean and clean, and that you may teach the children of Israel all the statutes which YHVH has spoken to them by the hand of Moses” (Leviticus 10:9-11).

Why were they to avoid any alcohol when they were serving in the tabernacle? Because they had a JOB to do:

You are going to see these very specific duties of priests repeated throughout the Scriptures, so keep your eyes out for that.

I can tell you that it is NOT an easy task to distinguish between clean and unclean things! Our enemy disguises himself as an “angel of light” (2 Corinthians 11:14), and things that appear to be good are often rooted in evil customs and pagan things, much like the reference above to kaballah.

The better we know the Torah, the easier it will be for us to “distinguish between holy and unholy, and between unclean and clean.” I was telling a friend this week that, frankly, the reason so many people are falling for garbage is that (a) no one IS distinguishing and teaching, or (b) no one wants to listen.

We are a kingdom of priests.

“You also, as living stones, are being built up a spiritual house, a holy priesthood, to offer up spiritual sacrifices acceptable to God through Yeshua the Messiah” (1 Peter 2:5).

“But you are a chosen generation, a royal priesthood, a holy nation, His own special people, that you may proclaim the praises of Him who called you out of darkness into His marvelous light” (1 Peter 2:9).

Kings copy the Torah and keep it with them, and they don’t multiply wives, horses, possessions that would distract them and entice them into idolatry (Deuteronomy 17:18-20). Priests do the job of distinguishing and teaching. Yes, I know these are just pictures, because we don’t have a temple, nor are we Levitical priests. But we have indeed been given these specific jobs. Are we doing them? Are we listening to those who are over us in the Master, who are also instructing us?

And we finish today with Aaron beginning his job of teaching:

“Now YHVH spoke to Moses and Aaron, saying to them, ‘Speak to the children of Israel, saying, “These are the animals which you may eat among all the animals that are on the earth…”‘” (Leviticus 11:1-2).

What was the first thing they were to teach? How the entire nation of Israel was to be a “holy” nation by avoiding eating unclean animals. This is crazy practical, folks!

I’ve written about clean and unclean animals (see below), and this post is long enough for today so I won’t repeat those things here. Just note these few things:

This chapter isn’t just about our diet! We aren’t to even touch unclean things. (Have your kids count how many times the word touch is used in this chapter.) We are not to have anything to do with things that are an abomination to YHVH — and if it happens accidentally, we must immediately take action, even before the day is ended.

“I am the Lord who brings you up out of the land of Egypt, to be your God. You shall therefore be holy, for I am holy” (Leviticus 11:45).

We are to be holy, set apart to YHVH. It’s serious business. It’s the difference between wheat and chaff. I know which side I want to be on!