“I have stretched out My hands all day long to a rebellious people, who walk in a way that is not good, according to their own thoughts; a people who provoke Me to anger continually to My face; …who eat swine’s flesh, and the broth of abominable things is in their vessels” (Isaiah 65:2-4).

Even though I “officially” cleaned the pork and other unclean foods out of my kitchen in 2007, it was quite some time before I realized how much “broth of abominable things” was still being served in our home.

I didn’t realize that pork and other unclean animals were used as ingredients all throughout our food supply. The day I learned some of this, I was truly overwhelmed! I felt I would never be able to shop at a grocery store or eat at a restaurant again. However, after I calmed down, I realized that I could learn how to use only clean ingredients – and that my food would usually taste better, cost less, and be healthier for it.

Pork is often used in baking goods and as a thickener. It is also often used in flavorings. Seafood and other unclean animals (such as beaver or human hair) can show up as a flavoring, a dough enhancer, or as a coloring.

Here are some of the ingredients to watch for. However, just because an ingredient is on this list does not mean it is always unclean. Many manufacturers can make these ingredients from clean animals or even from plants.

Foods to Watch Out For:

Food preparation also has to be considered. Since YHVH declared that any surface that touches the carcass of an unclean animal must be washed and then declared unclean until evening, we have to think about the pots, pans, grills, plates, cook tops, deli-slicers, knives, and even people who touch our food. This does indeed make it difficult to eat at a restaurant!

Again, it is very easy to get overwhelmed by all of this information. Here are some tips to help you:

When you get discouraged, review why we keep these commands: We want to be set-apart people for YHVH, loving what He loves and despising what is disgusting to Him. When you think about the fact that YHVH sees a piece of bacon, for instance, as a hunk of rotting, dead flesh, you will start to get a disgust for things that truly are an abomination in our Creator’s eyes.

Judaism has developed a system of checking the manufacturing process, being sure that clean foods are never contaminated by unclean things and watching that even animals are fed properly and slaughtered biblically.

While their system is stricter than the straightforward commands in Torah, our family has come to appreciate the protections that they offer, when we ourselves are not able to personally check on our food.

When a food has been declared kosher (Hebrew meaning “fitting” or “appropriate”), you will find a symbol on the package. Here are some common symbols used in the United States.[1] 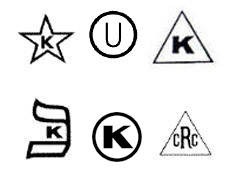 Many Jews will also avoid combining milk and meat together. They do that because of these commands:

“The first of the firstfruits of your land you shall bring into the house of the Lord your God. You shall not boil a young goat in its mother’s milk” (Exodus 23:19).

“The first of the firstfruits of your land you shall bring to the house of the Lord your God. You shall not boil a young goat in its mother’s milk” (Exodus 34:26).

However, we also find that Abraham showed hospitality to the three strangers that visited him by serving them curds and milk with the calf he had prepared. One of these guests was YHVH Himself![2]

The context of these commands is the bringing of an animal to be sacrificed as an offering to YHVH. As one author states,

“The new born kid, calf, sheep, should not be killed within the early new life it has, then be cooked in its mother’s milk (possibly because it may give some added flavor to the meat) that it was depending on for life.”[3]

Judaism adds a “fence law” to this command, forbidding someone from ever mixing a drop of milk with a tiny piece of meat. From this law also spring complex laws about how to separate dishes in your kitchen and how long to wait between eating meals. I don’t personally feel that these fences are necessary, since we are told that adding to YHVH’s commands is forbidden and can become a burden that turns people away from following YHVH.[4]

However, if you meet someone whose conscience compels them to follow all of Judaism’s kosher laws, be gracious and do not harm their conscience by knowingly mixing dairy and meat (cheeseburgers, meat lasagna, meat pizza, etc.). If you are hosting them in your home, use paper plates and disposable flatware, put a disposable tablecloth on your table, and be sure that all foods prepared in your home are made with kosher-labeled ingredients and/or fresh produce.

With all of these complicated rules, wouldn’t it be easier to become a vegetarian?

Yes, it certainly can feel that way, and many people have decided to take that route.

This is the route that Daniel and his three Hebrew friends chose when they were asked to eat meat in Nebuchadnezzar’s court. It is extremely likely that the meat being served was both offered to idols and sometimes from unclean animals.

“And the king appointed for them a daily provision of the king’s delicacies and of the wine which he drank, and three years of training for them, so that at the end of that time they might serve before the king. Now from among those of the sons of Judah were Daniel, Hananiah, Mishael, and Azariah. To them the chief of the eunuchs gave names: he gave Daniel the name Belteshazzar; to Hananiah, Shadrach; to Mishael, Meshach; and to Azariah, Abed-Nego.

“So Daniel said to the steward whom the chief of the eunuchs had set over Daniel, Hananiah, Mishael, and Azariah, ‘Please test your servants for ten days, and let them give us vegetables to eat and water to drink. Then let our appearance be examined before you, and the appearance of the young men who eat the portion of the king’s delicacies; and as you see fit, so deal with your servants.’ So he consented with them in this matter, and tested them ten days.

And at the end of ten days their features appeared better and fatter in flesh than all the young men who ate the portion of the king’s delicacies. Thus the steward took away their portion of delicacies and the wine that they were to drink, and gave them vegetables” (Daniel 1:5-16).

I feel that this passage summarizes the wisest approach we can take with our food. When we purpose in our hearts that we will not defile ourselves with anything, YHVH miraculously provides for us! What a gracious God He is!

Other than that, the rule in Scripture is that we should be considerate to the feelings of others. If a friend has chosen to eat only vegetables, then we should not serve them meat!

“Receive one who is weak in the faith, but not to disputes over doubtful things. For one believes he may eat all things, but he who is weak eats only vegetables. Let not him who eats despise him who does not eat, and let not him who does not eat judge him who eats; for God has received him. Who are you to judge another’s servant? To his own master he stands or falls. Indeed, he will be made to stand, for God is able to make him stand” (Romans 14:1-4).

We know that this passage is not talking about whether we can eat pork or shrimp. That’s not a “doubtful thing”!

However, wondering if an ingredient is truly clean, or if a preparation surface has been unknowingly contaminated with an unclean carcass, or if a food has been sacrificed to idols – these are often doubtful things!

“I know and am convinced by the Lord Jesus that there is nothing unclean of itself; but to him who considers anything to be unclean, to him it is unclean. Yet if your brother is grieved because of your food, you are no longer walking in love. Do not destroy with your food the one for whom Christ died. Therefore do not let your good be spoken of as evil; for the kingdom of God is not eating and drinking, but righteousness and peace and joy in the Holy Spirit. For he who serves Christ in these things is acceptable to God and approved by men.

“Therefore let us pursue the things which make for peace and the things by which one may edify another. Do not destroy the work of God for the sake of food. All things indeed are pure, but it is evil for the man who eats with offense. It is good neither to eat meat nor drink wine nor do anything by which your brother stumbles or is offended or is made weak. Do you have faith? Have it to yourself before God. Happy is he who does not condemn himself in what he approves. But he who doubts is condemned if he eats, because he does not eat from faith; for whatever is not from faith is sin” (Romans 14:14-23).

Isn’t the Torah beautiful? It truly is made so that we can both show our love for YHVH and our love for our neighbor as well.

As you spend the next months and years of your life learning the Torah, you will come across other food laws. I will give you a brief overview here, but for the sake of space in this already-long post, I encourage you to study these Scripture passages together with your family.

[1] You can find common kosher symbols for other countries at
http://kosherquest.org/kosher-symbols/.

« How God Defines Food
Keeping Clean: The Laws of Niddah »