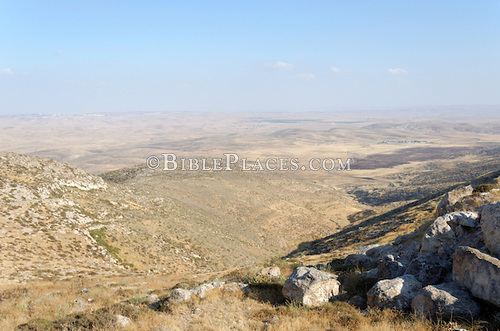 A Valley Near the Dead Sea (Image copyright Todd Bolen/BiblePlaces.com)

Good morning! I had so much fun reading all of Christine’s links this morning. If you are a history buff, don’t miss them. (You can always find them near the bottom of her daily post.)

The two chapters we read from Genesis today are extremely important and lay the foundation for much of the rest of Scripture. That is amazing to me, because most of my life, these chapters were fairly boring. I had no idea what the battle in Genesis 14 was describing — and what we don’t understand, we tend to ignore.

So let me point out a few things that experience has shown me are important to know later in the Bible.

A Map of the Land

I don’t have a license to copy maps and embed them here on my website, so I recommend pausing for a minute to click on these links for maps of the entire Middle East around the time of Abraham. Get an idea of the massive scale of the distances Abraham was traveling in Genesis 13 and the territory being fought over in the war mentioned in Genesis 14. So go look. I’ll wait here until you get back….

So who is the owner of this land?

Melchizedek gets it right when he tells us it is “God Most High, Possessor of heaven and earth” (Genesis 14:19).

During the days of Peleg (the uncle of Job), God directed Noah and his sons to “divide” the earth into territories belonging to 70 family groups, which are listed in Genesis 10. Some people call Genesis 10 “the King’s List,” in fact, because it lists the first men who were head over their respective family groups. I think God’s original idea is they were to be stewards of the land entrusted to them, rather than domineering kings.

The word king in Hebrew is melek (Strong’s #4428), which means “the male ruler of a nation or city state.” It comes from a Hebrew root meaning “to walk among the people,” and it gives the sense that each man was able to walk a certain distance and be responsible for all the people who lived in that area, who were under his authority and care.

In Genesis 10:10 we read about the beginning of the “kingdom” of Nimrod, a descendant of Ham, and you might remember that Nimrod was a tyrant, the builder of kingdoms rather than peaceful family groups. Christine Miller writes,

This is my understanding on this history mentioned in Genesis, which you most likely won’t find repeated in encyclopedias, because the history recorded in this part of Genesis has been relegated to the realm of fairy tales by most scholars. We know that in the fifth generation after the Flood, God repeated His command to Noah to fill the earth, as after five generations the eight persons who had emerged from the ark had increased to a sufficient number to send out colonies. (Peleg was born in the fifth generation, and in his days the earth was divided, Gen 10:25.) Josephus in fact tells us that Noah, led by the Spirit of God, divided up the earth into 70 portions, one portion for each of his grandsons and great-grandsons which are listed in Gen 10. (There are 70 descendants listed who became the heads of nations).

The sons of Shem were allotted the territory closest to their original colony in the mountains of Ararat, in the Near East; the sons of Japheth were allotted territory to their north, for the most part, and the sons of Ham were allotted territory to their south. Well, as the colonists journeyed to their allotments, a rebellion against the will of the LORD arose, led by Nimrod of the sons of Ham. We read in Gen 10 that Babel was the beginning of his kingdom. In fact there was no kingdom after the Flood until Nimrod began building cities to rule over. (In the same manner, Cain, who rebelled against the will of the LORD, was also the first to begin building cities, Gen 4:17.)

In Gen 1o, we read that Nimrod built four cities in the land of Shinar (Sumer). This land, and the land surrounding it, was originally allotted to Shem. From Sumer, Scripture records, Nimrod went to Assyria and built four more cities.

I believe what was going on, was that Nimrod, after he had established his power base in Sumer, was planning on going to each successive allotment in turn to establish his rule over it. He was the first tyrant bent on empire and world domination.

In other words, Nimrod stole the land that had been given to Shem. Shem was the godly line, the one Abraham descended from. The land where the Canaanites were dwelling in the time of Abraham had originally been given to Shem!

And we see the kings of Genesis 14 still trying to conquer and rule, to grow in power and authority — tyrants “bent on empire and world domination.”

But what was YHVH’s promise to Abraham?

“Walk in the land” — YHVH is making Abraham the king over this land, the one who “walks among the people.”

Kings of the Earth

Abraham was wealthy by this point, as evidenced by the fact that he had 318 trained servants who were as sons to him. In other words, these were his choice men, the ones in whom he had devoted his energy, especially since he didn’t yet have a son of his own (source). In other words, he had a lot more servants than just these! You can consider all of his servants the employees of a massive ancient corporation, and the 318 men mentioned here were in upper management, with Eliezer (mentioned in Genesis 15:2) as the vice-president under Abraham himself.

“There was a man in the land of Uz, whose name was Job; and that man was blameless and upright, and one who feared God and shunned evil. And seven sons and three daughters were born to him. Also, his possessions were seven thousand sheep, three thousand camels, five hundred yoke of oxen, five hundred female donkeys, and a very large household, so that this man was the greatest of all the people of the East” (Job 1:1-3).

Why does Satan have it out for these prosperous men of Shem? Why are the Kings of the Earth always rising up against them and their lands?

So YHVH God said to the serpent:
‘Because you have done this,
You are cursed more than all cattle,
And more than every beast of the field;
On your belly you shall go,
And you shall eat dust
All the days of your life.
And I will put enmity
Between you and the woman,
And between your seed and her Seed;
He shall bruise your head,
And you shall bruise His heel‘ (Genesis 3:14-15).

We have the benefit of the entire Bible to know that Satan (the serpent, the dragon) is watching for the Seed, the one promised who would “bruise” or crush his head and defeat him forever. If we skip ahead to the back of the book, we see that the Dragon is enraged and makes war with the offspring of the Woman (Revelation 12).

And the kings of the earth, the men bent on war and world domination, are very famous kings indeed. Christine explains that the kings who came against Sodom, Gomorrah, and the other cities in that valley were none other than Hammurabi, Eri-Aku, and other famous kings of history, pagan worshipers of the sun, moon, and stars from ancient Sumeria (a.k.a. Babylon). Of course, they were battling against powerful giants, as Christine tells us, and we were already told that the men of Sodom and the other cities “were exceedingly wicked and sinful against YHVH” (Genesis 13:13).

So why did YHVH help the side that wicked Sodom was on? Because this was Abraham’s land, and YHVH had given it to Him.  Abraham is also the one through whom the Promised Seed would come (Galatians 3). This is why Abraham could take only 318 trained servants and defeat the armies of Hammurabi and the other mighty kings.

“YHVH is their strength,
And He is the saving refuge of His anointed.
Save Your people,
And bless Your inheritance;
Shepherd them also,
And bear them up forever” (Psalm 28:8-9).

Genesis 14 is important because it is history that prophesies. This is none other than a battle between good and evil, between the Dragon and the Seed.

But here is the thing about prophecy. When YHVH says something, He means it. His sure word of prophecy will never fail. This is why we can trust Him, and when Abraham went out with his small “army” of employees, they could go in faith, knowing that YHVH would keep His Word and that their victory was certain.

“Now Yeshua, going up to Jerusalem, took the twelve disciples aside on the road and said to them, ‘“Behold, we are going up to Jerusalem, and the Son of Man will be betrayed to the chief priests and to the scribes; and they will condemn Him to death, and deliver Him to the Gentiles to mock and to scourge and to crucify. And the third day He will rise again‘” (Matthew 20:17-19).

Yeshua gives a sure word of prophecy to His twelve disciples in today’s reading, too — only we will see in the coming days that they did not believe Him. Instead, they acted in fear and unbelief, all denying Him. If they had simply believed Him, their grief and terror during His crucifixion would have been non-existent, because He had said He would rise again!

It wasn’t until after His resurrection that the power and authority began to flow through their lives. Why the change when we get to the book of Acts? Because now they realize they are children of promise, just like Abraham was, and that they could trust His sure words and walk in them with confidence, no matter what circumstances their eyes could see in the physical.

“And the Scripture was fulfilled which says, ‘Abraham believed God, and it was accounted to him for righteousness.’ And he was called the friend of God” (James 2:23).

« How to Tame Your Dragon (January 27)
Belief, Acceptance, Strength, and Authority (January 29) »