You are here: Home / Blog / Bible study / The Roots of Idolatry

In Acts 15, the Apostles gave instructions for beginning to teach new Gentile believers in Yeshua. Local congregations were to begin by teaching new believers to rid their lives of any sort of idolatry, and then they would continue to be taught week by week, as they gathered in their local synagogue on the Sabbath day.

“…we write to them to abstain from things polluted by idols, from sexual immorality, from things strangled, and from blood. For Moses has had throughout many generations those who preach him in every city, being read in the synagogues every Sabbath” (Acts 15:20-21).

In our modern Christianity, we would call this the very first “discipleship” method. Entire books have been written on how to teach and disciple new believers, but the method given by the Apostles makes a lot of practical sense.

The Bible is a big book! Where is a new person to start?

The list of four things given in Acts 15:20 might seem foreign to our ears – idols, sexual immorality, things strangled, and blood – but the Apostles obviously thought these were the most important things a new believer was to be taught!

In fact, if a believer did not rid these things from his life, the other members of a local congregation were not even to eat with that person!

“But now I have written to you not to keep company with anyone named a brother, who is sexually immoral, or covetous, or an idolater, or a reviler, or a drunkard, or an extortioner—not even to eat with such a person” (1 Corinthians 5:11).

In the Apostolic Writings, we see that belief in Yeshua as Savior was immediately followed by two things: 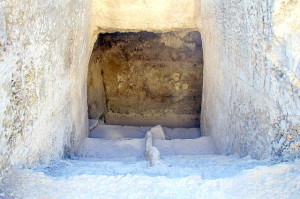 An ancient Mikveh (bath used for ritual immersion in Judaism) on the Temple Mount in Jerusalem. Image by Rudko, licensed under CC0 via Commons.

In the first towns the Apostles visited, most of the new believers in Yeshua were Jews, already familiar with God’s definitions of righteousness in His Torah. However, the further from Judea that they traveled, the more pagan the culture became.

Idolatry in the Early Church

In Athens, Greece, Paul was distressed to see the city was filled with idolatry.

“While Paul was waiting for them in Athens, he was greatly distressed to see that the city was full of idols. So he reasoned in the synagogue with both Jews and God-fearing Greeks, as well as in the marketplace day by day with those who happened to be there…

Paul then stood up in the meeting of the Areopagus and said: ‘People of Athens! I see that in every way you are very religious. For as I walked around and looked carefully at your objects of worship, I even found an altar with this inscription: to an unknown god. So you are ignorant of the very thing you worship—and this is what I am going to proclaim to you.

‘The God who made the world and everything in it is YHVH of heaven and earth and does not live in temples built by human hands. And he is not served by human hands, as if he needed anything. Rather, he himself gives everyone life and breath and everything else. From one man he made all the nations, that they should inhabit the whole earth; and he marked out their appointed times in history and the boundaries of their lands. God did this so that they would seek him and perhaps reach out for him and find him, though he is not far from any one of us. “For in him we live and move and have our being.” As some of your own poets have said, “We are his offspring.”

‘Therefore since we are God’s offspring, we should not think that the divine being is like gold or silver or stone—an image made by human design and skill. In the past God overlooked such ignorance, but now he commands all people everywhere to repent'” (Acts 17:16, 22-30, NIV).

In Ephesus, the believers immediately turned from their idolatry.

“And many [Ephesians] who had believed came confessing and telling their deeds. Also, many of those who had practiced magic brought their books together and burned them in the sight of all. And they counted up the value of them, and it totaled fifty thousand pieces of silver” (Acts 19:18-19).

Writing to the believers in city of Thessalonica, Paul commended them for turning from their idolatry.

“For our gospel did not come to you in word only, but also in power, and in the Holy Spirit and in much assurance, as you know what kind of men we were among you for your sake. And you became followers of us and of the Master… so that you became examples to all in Macedonia and Achaia who believe… Your faith toward God has gone out, so that we do not need to say anything. For they themselves declare… how you turned to God from idols to serve the living and true God” (1 Thessalonians 1:4-9).

I remember learning about idol worship as a young child. Idol worship happened “over there,” in deepest-darkest Africa, on foreign mission fields, in biographies and history books. It didn’t happen here in America, where I lived.

So when I would read about idolatry in the Bible, I would mentally check those instructions off my list. I was not involved in idolatry, so I didn’t need to worry about such things.

This was one of the reasons why the Old Testament was rather boring to me. I didn’t feel like it applied to me. It seemed to talk about idol worship constantly, but I didn’t know any idol worshipers personally. I certainly wasn’t one!

The Roots of Idolatry

A key to understanding the Bible is to always start at the beginning of the book and look for the first place something is referenced. Usually this means the book of Genesis.

Idolatry is mentioned for the first time in chapter 3 of Genesis.

“Now the serpent was more cunning than any beast of the field which YHVH God had made. And he said to the woman, ‘Has God indeed said, “You shall not eat of every tree of the gar-den”?’

“Then the serpent said to the woman, ‘You will not surely die. For God knows that in the day you eat of it your eyes will be opened, and you will be like God, knowing good and evil.’

“So when the woman saw that the tree was good for food, that it was pleasant to the eyes, and a tree desirable to make one wise, she took of its fruit and ate. She also gave to her husband with her, and he ate” (Genesis 3:1-6).

YHVH made only one rule for the first man and woman:

“And YHVH God commanded the man, saying, ‘Of every tree of the garden you may freely eat; but of the tree of the knowledge of good and evil you shall not eat, for in the day that you eat of it you shall surely die’” (Genesis 2:16-17).
The serpent tempted Eve to disobey YHVH’s command, and the reason he gave her was this: “you will be like God” (Genesis 3:5).

Eve liked the sound of that.

“When the woman saw that the tree was good for food, that it was pleasant to the eyes, and a tree desirable to make one wise, she took of its fruit and ate” (Genesis 3:6).

Sin always looks pleasant. It makes us feel wise. Much of the time, it tastes good.

What are the things in the world?

So the first act of idolatry – of wanting to be like God, to be worshiped – was a pleasant experience that appealed to her flesh in every way.

Eve’s sin resulted in separation from God and eventually, physical death as well. As Adam and Eve left the beautiful garden YHVH had made for them, YHVH instituted proper worship that would provide a covering for their sins until a Messiah could come to restore all things.

Over a period of about 1656 years, mankind spiraled downward into greater sin and violence, until finally YHVH sent judgment in the form of a worldwide flood. Noah and his three sons and their families started over afresh, and you would think that they would have been devoted to obeying YHVH completely. However, very soon the desire to be worshiped as a god began to fill the earth again.

Noah’s son Ham was the first to get trouble, and his son Canaan fell under a curse because of Ham’s sin. Noah’s grand-son Cush seems to have inherited a thirst for power, and his great-grandson Nimrod became a mighty warrior, historical records telling us that he placed himself up to be worshiped by all. He and his father Cush built many cities, including Babylon and Nineveh. The worship of false gods was perfected in these centers.

Early idolatry was characterized by things such as:

“And they said, ‘Come, let us build ourselves a city, and a tower whose top is in the heavens; let us make a name for ourselves, lest we be scattered abroad over the face of the whole earth'” (Genesis 11:4).

Idolatry always started as very similar to the worship of the Creator, but Satan would slightly modify it to make it acceptable. The lust of the flesh, the lust of the eyes, and the pride of life would be incorporated so that it would be appealing.

When YHVH saw the city and high place of worship that was being erected at Babel (Babylon), He confused their language and scattered them over all the earth.

As mankind scattered, we see the same elements of idol worship spreading across the globe – serpents and dragons, trees, images, worship of the heavens, holidays and rituals of worship, sacrifices, beautiful temples built on high places, and a fleshly passion for pleasure and secret wisdom. 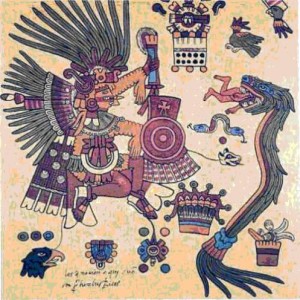 As you read through Genesis and into Exodus, you’ll rightly see that YHVH wanted His own people Israel to have nothing to do with this idolatry. However, whether it was in the land of Egypt where they had been enslaved or in the land of Canaan where they were going, they would be surrounded by idolatrous nations.

NEXT WEEK: Learn how to identify idolatry in the culture around us.

« Do Traditions Have Any Value?
Identifying Idolatry Around Us »