You are here: Home / Blog / Bible study / Identifying Idolatry Around Us

Before they entered the Promised Land, Moses was careful to review all of YHVH’s instructions with the people of Israel. He knew that they would be surrounded by the temptations of idolatry on every side, and he wanted to be sure they would know how to resist – unlike Eve!

Deuteronomy 4 gives a complete set of instructions on how to identify idolatry in the world. Let’s see how much of this applies to us.

When we worship the Creator of the universe, we are not to make any image. You probably remember this is one of the Ten Commandments.

Why do all other religions have carved images and statues? One possible reason is that YHVH made mankind to be made in His image, and everything we do is to reflect His nature and character. We are a “statue” or image, reflecting Him!

“Then God said, ‘Let Us make man in Our image, according to Our likeness; let them have dominion over the fish of the sea, over the birds of the air, and over the cattle, over all the earth and over every creeping thing that creeps on the earth.’ So God created man in His own image; in the image of God He created him; male and female He created them” (Genesis 1:26-27).

God filled the earth with images of Himself – men and women whom He had created. The intricacies and wonders of His creation bring Him fame and praise.

The flesh wants to be like God, however, and we want to fill the earth with images that we have created, with our own hands. At Babylon, they did this “to make a name for themselves” (Genesis 11:4), and in modern times, we might call this “humanism.”

Most of all, we are not to bow down to or worship any image. Worship, as you will see in the Torah, is more than just bowing down. It usually involves bringing offerings and includes music, dance, feasting, and celebration. These are all appropriate when done for the Creator, but they are not to ever be done for created things.

We will see in the Torah that YHVH has placed His name in only one place, and that is the only place where we may worship Him. We must do it only in the way He has prescribed, at the times He has commanded, using the methods He has set up. 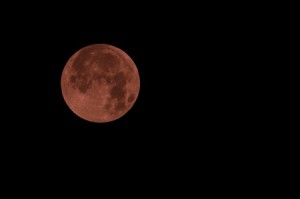 “And take heed, lest you lift your eyes to heaven, and when you see the sun, the moon, and the stars, all the host of heaven, you feel driven to worship them and serve them, which YHVH your God has given to all the peoples under the whole heaven as a heritage” (Deuteronomy 4:19).

Our Creator made the lights in the sky for more than just beauty. According to Genesis, we learn that they are for telling time.

Then God made two great lights: the greater light to rule the day, and the lesser light to rule the night. He made the stars also. God set them in the firmament of the heavens to give light on the earth, and to rule over the day and over the night, and to divide the light from the darkness. And God saw that it was good. So the evening and the morning were the fourth day” (Genesis 1:14-19).

As we will learn in a later chapter, the “signs and seasons” mentioned in our English Bible refers to our calendar, and especially to special “appointments” that YHVH desires to have with us throughout the year.[1] In addition, the stars tell a beautiful story of the Messiah and King who would defeat the serpent Satan and redeem all of mankind from sin and death.

It is only logical that idolatry would steal the signs and seasons in the sky and twist them into a perversion of the truth.

“The heavens declare the glory (fame) of God;
And the firmament shows His handiwork.
Day unto day utters speech,
And night unto night reveals knowledge.
There is no speech nor language
Where their voice is not heard.
Their line has gone out through all the earth,
And their words to the end of the world” (Psalm 19:1-4).

All mankind can see the sun, moon, and stars. They are intended to make us look up and seek after God. The holidays which are commanded in the Torah (Leviticus 23) display a beautiful picture of Yeshua the Messiah (as we will soon learn), and His calendar is perfect for our health, our rest, and our joy.

But when we look up at the stars, we can easily be tempted to worship them instead.

Throughout every culture on earth, you will see images of the sun, the moon, and the stars, used in ways which do not draw people to worship the Creator.

“When you beget children and grandchildren and have grown old in the land, and act corruptly and make a carved image in the form of anything, and do evil in the sight of YHVH your God to provoke Him to anger, I call heaven and earth to witness against you this day, that you will soon utterly perish from the land which you cross over the Jordan to possess; you will not prolong your days in it, but will be utterly destroyed. And YHVH will scatter you among the peoples, and you will be left few in number among the nations where YHVH will drive you. And there you will serve gods, the work of men’s hands, wood and stone, which neither see nor hear nor eat nor smell” (Deuteronomy 4:25-28).

A sad characteristic of idolatry is that people begin to pray to the gods they have created. These statues are made of wood and stone. They cannot see or hear, yet when crops fail or wombs miscarry, mankind begs their idols for help. They cannot eat or smell, but mankind is tricked into bringing gifts of crops, of wine, and of money to the gods, lining the pockets of the priesthood behind it all. Entire industries are set up, where “the works of men’s hands” are made with expensive stone, metal, and woodcarvings. The rich get richer. The poor get poorer.

When the gods don’t listen, people become desperate. They bring their firstborn children, thinking that their sacrifice will please the gods. From the horrible god Molech, whose burning arms held infant children over the fires, to the gods of abortion, where the organs of unborn babies are sold to make industry wealthy and to “improve lives,” mankind is destroyed from the worship of false gods.

“For the wrath of God is revealed from heaven against all ungodliness and unrighteousness of men, who suppress the truth in unrighteousness, because what may be known of God is manifest in them, for God has shown it to them. For since the creation of the world His invisible attributes are clearly seen, being understood by the things that are made, even His eternal power and Godhead, so that they are without excuse, because, although they knew God, they did not glorify Him as God, nor were thankful, but became futile in their thoughts, and their foolish hearts were darkened. Professing to be wise, they became fools, and changed the glory of the incorruptible God into an image made like corruptible man—and birds and four-footed animals and creeping things.

“Therefore God also gave them up to uncleanness, in the lusts of their hearts, to dishonor their bodies among themselves, who exchanged the truth of God for the lie, and worshiped and served the creature rather than the Creator, who is blessed forever. Amen.

“For this reason God gave them up to vile passions. For even their women exchanged the natural use for what is against nature. Likewise also the men, leaving the natural use of the woman, burned in their lust for one another, men with men committing what is shameful, and receiving in themselves the penalty of their error which was due.

“And even as they did not like to retain God in their knowledge, God gave them over to a debased mind, to do those things which are not fitting; being filled with all unrighteousness, sexual immorality, wickedness, covetousness, maliciousness; full of envy, murder, strife, deceit, evil-mindedness; they are whisperers, backbiters, haters of God, violent, proud, boasters, inventors of evil things, disobedient to parents, undiscerning, untrustworthy, unloving, unforgiving, unmerciful; who, knowing the righteous judgment of God, that those who practice such things are deserving of death, not only do the same but also approve of those who practice them” (Romans 1:18-32).

NEXT WEEK: We’ll continue this discussion, and learn how to abstain from idolatry.

[1] The Hebrew word for “seasons” is moedim. You can read about YHVH’s commanded moedim in Leviticus 23.

« The Roots of Idolatry
Abstaining from Idolatry »