You are here: Home / Blog / Bible study / The Commandments of Men 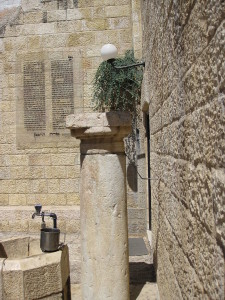 A sink for ritual hand washing at the entrance to the Ramban Synagogue.
Image courtesy Wikipedia.

Some people define Torah observance as learning a little bit about the Jewishness of Yeshua, so that we can walk as He walked. Yeshua was a Jew, raised in a culture of first-century Judaism, and as we learn about how He lived and how He thought, we can follow His example. We can be one of His disciples.

I certainly do believe that this is a worthy goal, for His disciple John wrote,

However, my goal is not to simply learn a new Jewish culture. Rather, I want to be obedient to the commands of His Father, just as He was.

One day the Pharisees and teachers of the law – who would be equivalent to our modern-day rabbis – came to Yeshua and asked Him why His disciples did not wash their hands before eating, in the tradition of the Orthodox rabbis. Handwashing before meals is not commanded in the written Torah, but there is certainly nothing wrong with washing hands before eating. Yeshua did not condemn their tradition of hand washing because it was a tradition – but rather because many rabbis were teaching their disciples that it was a command of God even when it wasn’t.
Sometimes traditions even replaced the commands of God.

Why do you also transgress the commandment of God because of your tradition?

For God commanded, saying, “Honor your father and your mother”; and, “He who curses father or mother, let him be put to death” (Matthew 15:2-3).

Yeshua was referencing a first-century rabbinic teaching that had been elevated to a place of higher importance than the written Torah given by Moses, even to the point of replacing the direct command of God to honor one’s parents.

Thus you have made the commandment of God of no effect by your tradition. Hypocrites! Well did Isaiah prophesy about you, saying:

“‘”These people draw near to Me with their mouth, and honor Me with their lips, but their heart is far from Me. And in vain they worship Me, teaching as doctrines the commandments of men”‘” (Matthew 15:3, 6-9, quoting from Isaiah 29:13).

By the first century, much oral tradition had crept into Jewish culture. Tradition said that Moses received both writ-ten law (Torah) and oral law (Halachah) on Mount Sinai. The oral laws given to Moses were to guide everyday practice, or the way in which people should specifically “walk out” the Torah. Legend had it that these laws were passed down orally from the seventy elders of Israel, all the way through the centuries, until by the time of Yeshua, they were formally taught (still by oral transmission) to each new generation.

After the destruction of the Temple in Jerusalem in 70 A.D., the Pharisees wrote the oral traditions down so that they would be preserved. While there are several versions, the majority of Judaism recognizes the “Babylonian Talmud.” When a modern-day Jew claims to be “Torah Observant,” he means that he tries to live his life in obedience to the oral law, to the Talmud, as taught to him under the authority of his local rabbi.

Unfortunately, as we read in the verses from Matthew 15 above, some of the traditions given orally contradicted the commands YHVH told Moses to write down. You can read several more examples in Matthew 23. In fact, even today, various groups of Jews might have different halachah that determines how they live their daily lives, from what foods they may eat, to how they celebrate Sabbath. The important thing is not that they carefully follow the written Torah as given in the first five books of the Bible, but rather, that they submit to the authority of the rabbis. They “teach as doctrines the commandments of men.”

Yeshua placed a strong emphasis on the commands of His Father. In fact, the book of John tells us that Yeshua Himself is the Word of God.

“If anyone loves Me, he will keep My word; and My Father will love him, and We will come to him and make Our home with him. He who does not love Me does not keep My words; and the word which you hear is not Mine but the Father’s who sent Me” (John 14:23-24).

“If you keep My commandments, you will abide in My love, just as I have kept My Father’s commandments and abide in His love” (John 15:10).

« What Does It Mean to Be Torah Observant?
Learning the Torah »