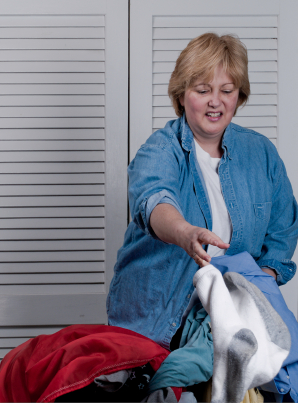 Several months ago I took a survey of all my readers, and one of the questions was whether you wished you could spend MORE or LESS time homeschooling your children each day.

Across the board, though, no matter how each of you answered, you wished you had more time in a day for what you felt was really important. These things included

Do you see a theme here? I sure do! We as mothers know that “a child left to himself brings his mother to shame,” yet we agonize about how to manage our time so we can spend more with the kiddos God gave us.

We want to do school with our kids! That’s why we chose to homeschool in the first place. We like it — and it’s driving us crazy that we’re doing laundry rather than reading aloud to our kids.

So what things keep us from having more time to homeschool?

1. Working part-time or having a home-based business, usually because of economic difficulties

Yes, finances are tight for families everywhere. It’s not getting better, either. Many homeschool moms live with the daily reality of trying to teach their children in addition to working part-time, trying to start a business from home, or assisting their husbands with his work. This was the number one reason given for not having enough time to homeschool! Isn’t that significant?

(It’s so significant that I’m going to return to this topic next week. In the meantime, if you’re having trouble affording homeschooling, I highly recommend that you download the free report “7 Secrets to Homeschooling Through a Financial Storm,” by Lee Binz.)

This was the second highest response on my survey. Many, many of us are struggling to cook healthy food from home, from scratch, by soaking, sprouting, grinding, baking, stirring, baking, planning, reusing, shopping, gardening, preserving… whew!

Or, we’re living with tremendous guilt because we want to do all these things, but we can’t figure out how… and get the school work done, too.

3. Housework of other kinds

We may be homeschooling, but we still need clean underwear and socks. Or, as often happens at my house, we’re so busy homeschooling that we don’t realize we’re OUT of underwear and socks until we try to find some to wear! And then there are toys that appear in every room of the house, multiplying like the rabbits we have to find time to feed for all those 4H projects. This doesn’t include finding time to change the sheets, mow the lawn, get groceries, put gas in the car, pay the bills (and file the paperwork — yeah, right), and make the twice-a-year switch from summer clothes to winter clothes for umpteen million children. We change diapers, we give baths, often while burning making supper and reading books to three-year-olds. The maddening thing is that as soon as we’ve cleaned the bathroom, someone messes it up again. It can make you feel a tad crazy…

A significant minority of you responded that you didn’t have more time to homeschool because little ones (age baby to preschool) needed much of your time.

Of course, when we’re often pregnant, sometimes on bed rest, taking a “baby moon” after having a baby, getting little sleep during the first few months of babyhood, and chasing after a newly mobile child… it can be very difficult to spend enough time on school.

It can get even more complicated if we lack the time to properly train our youngest children, ending up instead with hyperactive, constantly moving, forever challenging, and often whining preschoolers. We know in our hearts that this age group needs us, probably even more than our older children, yet it’s hard to justify spending much time with them when local school districts need to see report cards, standardized test scores and transcripts from the older bunch.

There weren’t as many responses in this category as I thought there would be. I applaud how many of you have decided to eliminate going outside the home, at least as much as you could. There is nothing wrong with “extra-curricular activities,” but you’ve also figured out that it’s hard to “home” school if you’re never home! However, for some of us, we still have some activities that are high enough of a priority that we’ve kept them in our schedules. It seems to cause a problem more for larger families than smaller ones. But should you totally ignore the specialized interests of a few children for the sake of the daily grind?

These were the top reasons you gave for being so busy, yet over half of you left individual comments that were very revealing.

Well, I’ve got some opinions! (You knew I would! 🙂 ) Can you tell that I’m introducing a new series of blog posts? I’d like to take a few weeks to look at the management side of homeschooling, both from a biblical and from a very practical side. Over the next few weeks, let’s tackle some of these issues together.

(For starters, if you have an opinion on one of the topics above, I’d love to hear your comment below! OOPS! I just realized that I had the comment form closed! No wonder there haven’t been any comments…  Well, it’s working now, if you’d like to leave one. 🙂 )