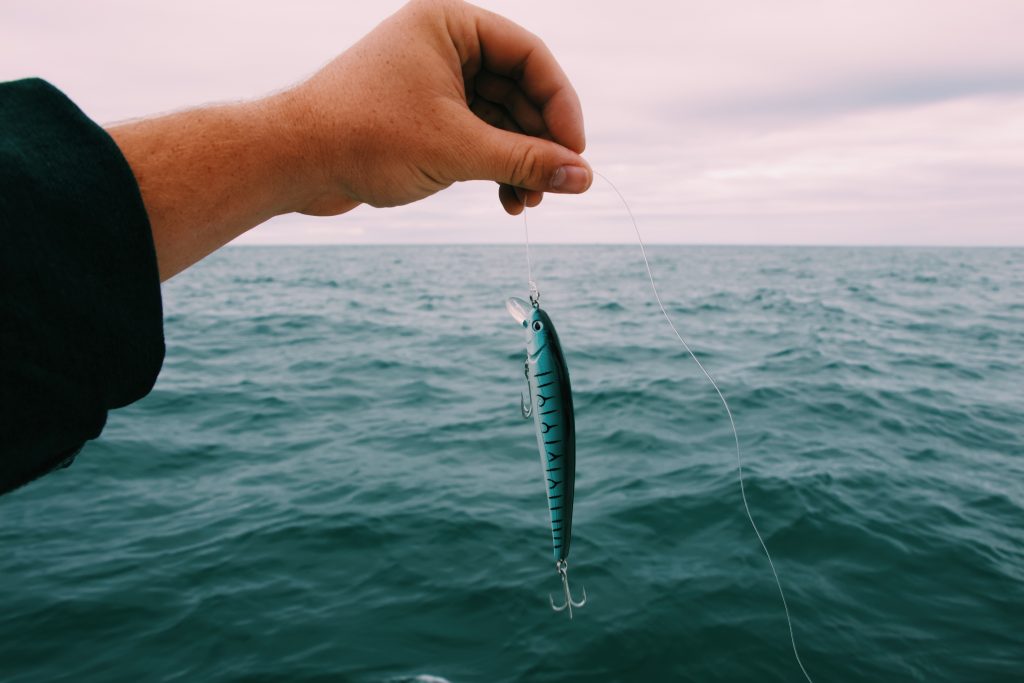 This fish swallowed a lie — hook, line, and sinker (Photo by Mael BALLAND on Unsplash)

Yesterday we began reading through the Bible with the goal of defining the six foundational truths all people should know, according to the author of Hebrews 6:1-2.

“Therefore, leaving the discussion of the elementary principles of Christ, let us go on to perfection, not laying again the foundation…
– of repentance from dead works and
– of faith toward God,
– of the doctrine of baptisms,
– of laying on of hands,
– of resurrection of the dead,
– and of eternal judgment” (Hebrews 6:1-2).

We defined “the doctrine of baptisms” and “laying on of hands,” and today I am noticing the “faith toward God,” the first mention of “dead works,” and a clue to what “eternal judgment” means.

I actually noticed something yesterday, but I forgot to mention it: When YHVH says something, it happens!

Faith is taking God at His Word, never doubting it and acting upon what He has said.

And so when we see the Enemy of God appear today, the first thing we see him attack is the truth of God’s Word.

“Now the serpent was more cunning than any beast of the field which YHVH God had made. And he said to the woman, ‘Has God indeed said, “You shall not eat of every tree of the garden”?'” (Genesis 3:1).

He makes us doubt it. It starts as a little seed of doubt, but if we allow it to take root in the soil of our hearts, it quickly grows into something ugly.

The new sprout of doubt starts to subtly change what God says. (And when it has changed, we have to ask ourselves if it is actually God’s Word anymore. No! It’s not!)

“…but of the fruit of the tree which is in the midst of the garden, God has said, ‘You shall not eat it, nor shall you touch it [added to what God said], lest you die.’ ”(Genesis 3:3).

And a full-grown doubt is a lie. It directly contradicts what God has said.

“For God knows that in the day you eat of it your eyes will be opened, and you will be like God, knowing good and evil” (Genesis 3:5).

We all know how this turned out and it wasn’t very good. (Cry!) That’s why we are reminded in Psalm 2:12,

In Matthew, we see that the wise men walked by faith. In other words, they put actions to their beliefs.

They had studied the prophecies about the promised Messiah, but they didn’t stop at study. They planned a trip, complete with camels, provisions for a long journey, and expensive gifts for the new King. Let your mind dwell on the amount of faith they had! And that’s exactly what faith is. It is not a belief system. It is action.

Knowing what “faith toward God” is helps us understand what “dead works” are. They are actions taken in opposition to what God has said.

And they bring forth death.

The first “dead work” happened in Genesis 3, when Eve (and then Adam) believed the lie that the serpent told them, and instead of being strong in faith toward God, they doubted Him.

The Father had promised them that this would bring forth death (Genesis 2:17), but they obviously didn’t believe that would happen. When the serpent reinforced that doubt with his lie, “you will not surely die,” they swallowed it hook, line, and sinker. (This is a way of saying that they were like a fish in a pond who sees a shiny bait at the end of a fisherman’s line, and he swallows the entire bait — and it ends up killing him.)

The Enemy is using the same tactic today. He wants us to think that “dead works” are doing what God says. He whispers to us that if we do things God’s way, it will ruin everything.

If your husband starts resting on the seventh day of every week, he will lose his job! You’ll lose the house! You’ll be homeless…

If you don’t harvest your fields this Saturday, your crop won’t get in. You will look like you’re lazy. You’ll lose your reputation. You’ll probably lose the entire farm…

If you keep the biblical feasts (Leviticus 23), your family will reject you, your children will rebel, and you’ll never have any fun in life again…

And then he tells you that if you disobey God, you won’t really have any consequences.

Working just this one Saturday won’t be a problem. You can start resting next week…

Hanging out with your friends at this pagan holiday celebration is fine. You can be with them without celebrating their feast…

Little tiny whispers. Actions based on those whispers.

And if the Word of God is to be believed, death is the result.

And if the serpent is to be believed, nothing bad will happen.

My husband and I were talking the other day about the frustrating fact that lots of people do bad things, and nothing bad ever seems to happen to them. Do you ever feel this way, too?

Maybe (and this is pure conjecture), but maybe Adam and Eve had that thought, too. It wasn’t any fun to have YHVH discover them in the garden. They were hiding in the bushes, and they felt stupid and naked, totally found out.

But after YHVH sat and pronounced His “judgments” on them, what changed?

Okay, they had to start wearing clothes all the time (and making them, too). That was annoying. And they did get kicked out of their beautiful home. Frustrating. And thorns started growing. Exhausting.

But they didn’t die. Right?

It seems like the Father is slow in making things right, in requiring wrongdoers to make retribution.

But this is just another doubt and lie that the Enemy wants us to believe. The Word of God says that the Creator of the universe always follows through on the judgments He pronounces.

We’re right back at “faith toward God” again.

The Enemy wants us to doubt that eternal judgments will happen.

On a side note, the word eternal has appeared twice in Genesis so far.

“YHVH God planted a garden eastward in Eden, and there He put the man whom He had formed” (Genesis 2:8).

“So He drove out the man; and He placed cherubim at the east of the garden of Eden, and a flaming sword which turned every way, to guard the way to the tree of life” (Genesis 3:24).

The word east is qedem (Strong’s 6924) and it means “to face toward the rising sun.” I am not wise enough to know why this word is also translated eternal, but I’ve added it to my list to study further. (I keep this list on my phone, in an app called Google Keep. It’s very handy! Otherwise I’ll never remember all these things I want to study “someday.”)

However, after reading Psalm 2 this morning, I get the feeling that just as the sun rises in the east every morning, without fail, the eternal judgments of YHVH are also without fail. We might have to allow some time to pass before the next sunrise, but we know it will happen. It is guaranteed.

“He who sits in the heavens shall laugh;
YHVH shall hold them in derision.
Then He shall speak to them in His wrath,
And distress them in His deep displeasure” (Psalm 2:5-6).

I learned a lot today! I want to walk by faith. To do that, I need to identify the Enemy’s lies and refuse to believe them. I want to base my actions on the dependability of YHVH’s Word, that just as the sun will rise tomorrow in the east, so also will His Word be fulfilled, exactly as He has said.

What did you learn today?