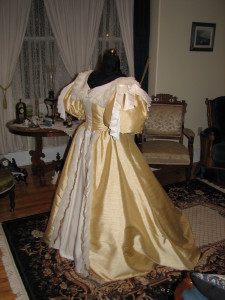 I first met Anne of Green Gables when I was in fourth grade. My great grandmother purchased the original book series when they were first published in the early 1900s, and she gave them to me when I was a young girl, because my name was Anne-with-an-E, of course.

And in 1984, I wanted nothing more than puffed sleeves like Anne had. She dreamed about them for years, but Marilla wouldn’t hear of it. It wasn’t until Matthew “put his oar in” before a concert that Anne finally got her longed-for puffed sleeves.

And now my girls are enamored with Anne of Green Gables. The books are all on my Kindle now, and the girls have a habit of sneaking my Kindle into their beds at night so they can read “just one more chapter.” I’ve been curious if they’ll want puffed sleeves, too.

Isn’t that how we fall in love with Yeshua? We read “just one more chapter” of the book that’s all about Him, and pretty soon, we want to eat the way He ate, tell stories the way He told them, help others the way He cared, and even be proud to bear His name.

I have several goals for the months ahead.

What would Jesus Do? I want to get to know my Master better this year. I want to walk in His steps. Do you have similar goals?