You are here: Home / Blog / Fun Stuff / Life at Anne's house / Update on our Little Guy 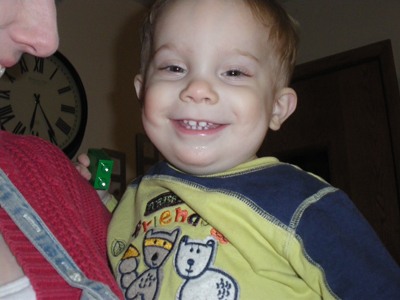 Today I wanted to give my online friends an update on our youngest son, Alistair. He is now 14 months old, but for much of his life, we have been realizing that he is not growing and progressing like our previous children. I haven’t said much online because we wanted to be sure it wasn’t just because he was born five weeks early and needed to just “grow out of it.” However, as time has gone by, we’re realizing the problem is a little more serious than that.

So that you can pray for us and know a little more about our family, we’ve decided that now is a good time to share a little more.

Last week, we had a consultation with Dr. Deborah Renaud, a pediatric neurologist at the Mayo Clinic, to check Alistair’s development. In some ways, he’s doing really great, but in other ways, he truly is not progressing as he should be. We had a very long appointment with the doctor, and she was very kind and asked wonderful questions. We were very pleased with our appointment.

Alistair is now awaiting two more appointments. First, Dr. Renaud is recommending an MRI. Alistair will be sedated for about 5 hours as they do a complete check of all areas of his brain. Dr. Renaud suspects that Alistair suffered from a lack of oxygen during his birth, possibly for several hours and for a couple different reasons (placenta abruptia and extended heart decelerations after contractions) — all combining into a high probability that his brain could be injured (cerebral palsy). The MRI can tell us where the brain injuries are and can help us predict the problems he’ll have because of them. In addition, because he is still young, we can help him compensate for these injuries by reteaching his brain to use different pathways to accomplish the same things. It’s important to do this sooner rather than later… you know, it’s harder to teach old dogs new tricks. 🙂

While they’ve sedated him, they’re also going to run a complete panel of blood work, just in case nothing is wrong on the MRI. They’ll be checking for anemia (he’s pale, and a lack of oxygen in his bloodstream could cause some of the same symptoms he’s having — such a simple solution, if that’s it). They’re also checking for all the autoimmune diseases that I have, as well as the more common metabolic disorders that can cause problems in children, plus re-screen all the common genetic problems that they routinely check for at birth, just to be safe. Finally, they’ll be checking for IgA deficiency, since it runs in our family and his immune system seems a little weak.

They’ll do all this testing first thing in the morning, then run the MRI, then we’ll all meet with Dr. Renaud in the afternoon to get the results — all in the same day. What a blessing! So that very day, we’ll have quite a few answers.

On another day, when he’s feeling himself, we’ll meet with “Physical Medicine,” which are fancy doctors who get paid big bucks to play with babies all day. They’re going to spend several hours playing with Alistair, feeding him (since one of his problems is that he can’t feed himself yet), and just observing him. Then they will make recommendations to local services, maybe right here in our town, that we can take advantage of to help him. They will also be checking his vision, his speech (on which he’s scoring above average at the moment, praise God), his tongue for swallowing problems, his muscles (which are spastic, or tight and sore), and maybe even watch him take a nap. (My oldest daughter says that this would be a fun job to have, to get paid to play with babies and children!)

As of today, I don’t know when these two appointments will be. We’re supposed to get a phone call sometime. It will take from a week to 2 months to get it all scheduled, they said. Isn’t healthcare great? LOL! So I’ll have to let you know.

Dr. Reynaud’s opinion is that Alistair isn’t doing too badly, but that he needs to be checked, and that the younger he is, the better it will be. So that’s all we know. We thank you all so much for continuing to pray for us. We thank you also for understanding if some weeks I’m more tired than normal, if I don’t always get everything done online, or if I’m a little slow responding to your comments and email. I love you all, but my kiddos and husband come first!

Finally, I praise God for a new appreciation of all you mothers of “special-needs” children. I had no idea how much you do! I admire you, and I hope to learn much from you in the days ahead.