I’m late getting this posted, and honestly, my first thought today was that I was overwhelmed, not in a bad way, but filled with awe over how many things I could see. How would I condense it down? 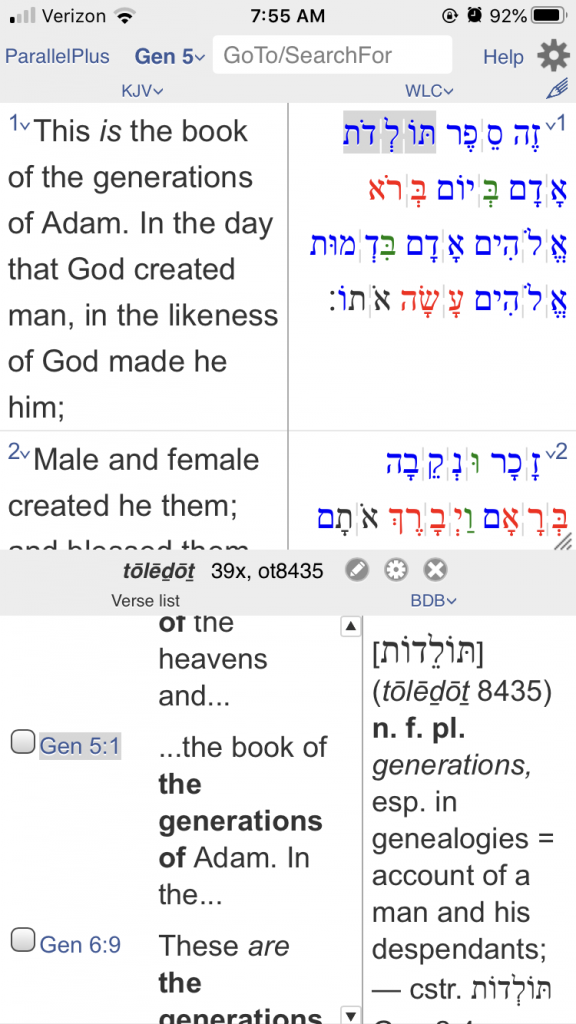 A screenshot of my Parallel Plus app, Genesis 5:1

It started in the first verse, Genesis 5:1. I have a goal of reading at least one verse in Hebrew every day, as part of my Hebrew language study. This is why I have the Parallel Plus app installed on my phone. I like how the words are color-coded, and I like that they include the Hebrew vowels. I also love that I can click on a word and see its meaning and Strong’s number down below. This is helping me increase my vocabulary greatly.

I was pretty excited this morning, because I could actually read the entire verse in Hebrew — and actually understand every word. Yay! I’m making some progress!

Little did I know that this verse would contain every theme I found in today’s Bible reading.

I have other friends who think in pictures. They are artistic anyway, often drawing, painting, making memes to share on Facebook. I can’t draw. Well, maybe a stick figure. But they see pictures everywhere in the Scriptures, and the symbols in the Word delight them to no end.

And there are so many other teaching tools of Scripture! It’s good to learn about them so that you can find one that fits the way the Creator uniquely formed you — and also so that you can understand what others are saying.

For me, I’m just a words girl. I love words. I literally think in words — letters, words, sentences. And now that I’m learning Hebrew, I’m even starting to think in Hebrew words. (I even dream more about words than pictures.)

So as I’m reading through the Bible, I see words everywhere. Words, their various forms and roots, their etymologies, their shades of meaning.

I actually think this is fun!

So why should it have surprised me so much when today’s reading was full of words that I’ve already been thinking about?

I was happily reading along through Genesis 5, through all the genealogies and names listed. Those names all mean something, did you know? That’s a pretty fun study, but I won’t distract you today.

And the word genealogy itself means something, as author Bill Cooper points out in his wonderful book The Authenticity of the Book of Genesis (amazon affiliate link). But I won’t distract you today.

So I sail happily into Genesis 6, starting to wonder if I’m going to find any of the foundation principles we’ve been watching for from Hebrews 1:1-2.

Suddenly! Bam! Anne, did you see that?!

“This is the genealogy of Noah. Noah was a just man, perfect in his generations. Noah walked with God” (Genesis 6:9).

Whoa… hold everything. Those are translated as the same word in English, but they are not the same word in Hebrew. (If I could have a penny for every time this seems to happen, I’d be a millionaire.)

According to author Jeff Benner,

“A generation [dohr] is one revolution of the family line. The Hebraic understanding of order is the continual cyclical process of life and death or renewal and destruction. This root can also have the meanings of circling around of something in a wide area or to cover a large area. Ancient Hebrew: The pictograph

is a door representing a moving back and forth. The

is the head of a man. Combined these mean ‘the back and forth movement of man.”

Maybe this caught my eye because I had recently been studying what the number eight means in Hebrew. According to Brad Scott,

Erased, Cut Off, and Ruined

Then it happened again. (I’m usually deep into the history of Noah and the evil of the world by this time. Or the sons of God and the nephilim — who doesn’t like those topics?) But I saw more words translated the same but coming from entirely different Hebrew words.

“Then YHVH saw that the wickedness of man was great in the earth, and that every intent of the thoughts of his heart was only evil continually. And YHVH was sorry that He had made man on the earth, and He was grieved in His heart. So YHVH said, ‘I will destroy man whom I have created from the face of the earth, both man and beast, creeping thing and birds of the air, for I am sorry that I have made them'” (Genesis 6:5-8).

“And behold, I Myself am bringing floodwaters on the earth, to destroy from under heaven all flesh in which is the breath of life; everything that is on the earth shall die” (Genesis 6:17).

There! You’d think that both uses of the word destroy would be the same — but they are not.

“I will makhah (Strong’s 4229) man whom I have created from the face of the earth.” — To remove by drying or sweeping away through rubbing; to polish in the sense of a vigorous rubbing; erase.

“I Myself am bringing floodwaters on the earth, to chakhat (Strong’s 7843) from under heaven all flesh.” — to damage, ruin by destruction, disfigure. 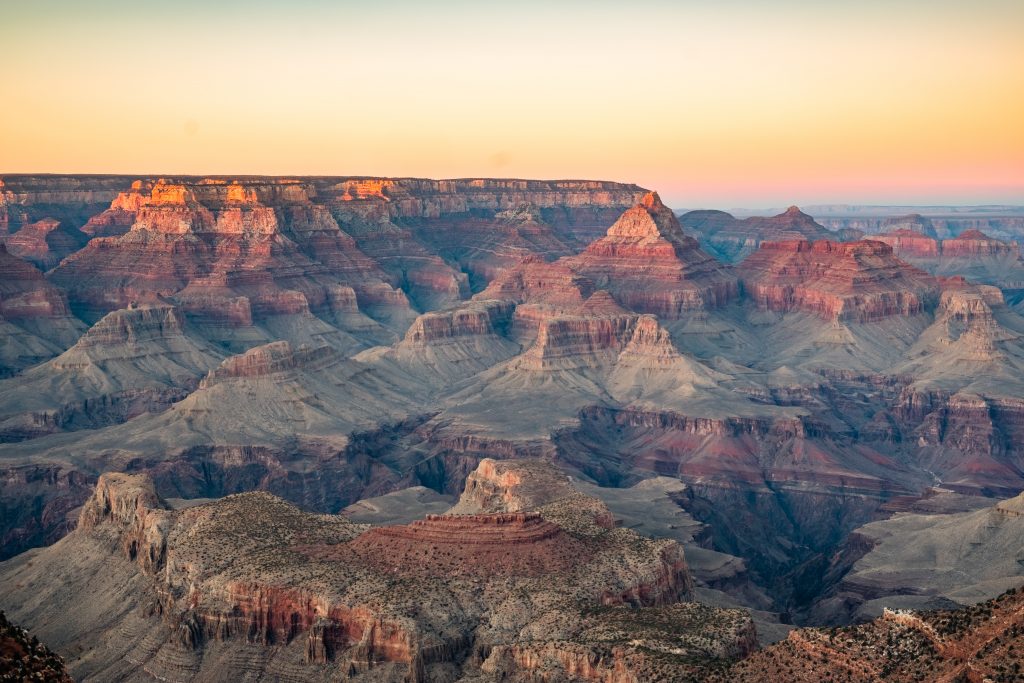 The Grand Canyon
Photo by Alan Carrillo on Unsplash

Of course, it’s not hard for me to see why flood waters covering the earth would vigorously rub out and erase a human population crushed under their weight. And I can see why flood waters would ruin and disfigure the entire surface of the earth, as we can still see evidence of all around us, from the Grand Canyon to the American Great Lakes near where I live.

And while it still bugs me that translators used the same word for two entirely different Hebrew words, there is another reason this caught my eye.

When I was looking at the Ancient Hebrew Lexicon for chakhat, I scrolled up a bit with my finger to see what other words shared the same Hebrew root.

I saw words like consumption, which means to destroy by making thin, and to char, which means to turn black with ash. You see, those words sound like Addison’s Disease, the condition I had for over 11 years. Even though YHVH miraculously healed me in 2017, I remember learning in Deuteronomy 28:22, 27 that these conditions were a curse placed on Israel for their sin and idolatry. And here those kinds of words show up again in a setting of total destruction!

There is a similar word in this passage.

End is the Hebrew word qets (Strong’s 7093) means “the end of something or to make an end by cutting it off.”

What?! Remember I mentioned that I didn’t blog in 2019? Well, I didn’t! One of my very last posts is called “Cut Off: A History Lesson for Today.” I have been thinking and thinking about that post for over a year, no kidding! And as soon as I start blogging again, here it shows up again. I hope you’ll take 20 minutes this Sabbath to read it again, because I suspect it’s a topic that is going to show up throughout 2020.

Why do I say that?

Because it’s one of the foundational truths of Hebrews 6:1-2 — eternal judgment.

And as Peter warns us in his second letter, we should be contemplating this topic! It’s foundational to our lives — because our lives depend on it!

“Scoffers will come in the last days, walking according to their own lusts, and saying, ‘Where is the promise of His coming? For since the fathers fell asleep, all things continue as they were from the beginning of creation.’

For this they willfully forget: that by the word of God the heavens were of old, and the earth standing out of water and in the water, by which the world that then existed perished, being flooded with water. But the heavens and the earth which are now preserved by the same word, are reserved for fire until the day of judgment and perdition of ungodly men.

But, beloved, do not forget this one thing, that with YHVH one day is as a thousand years, and a thousand years as one day. YHVH is not slack concerning His promise, as some count slackness, but is longsuffering toward us, not willing that any should perish but that all should come to repentance.

But the day of YHVH will come as a thief in the night, in which the heavens will pass away with a great noise, and the elements will melt with fervent heat; both the earth and the works that are in it will be burned up. Therefore, since all these things will be dissolved, what manner of persons ought you to be in holy conduct and godliness, looking for and hastening the coming of the day of God, because of which the heavens will be dissolved, being on fire, and the elements will melt with fervent heat?” (2 Peter 3:4-12).

I saw much more today. That’s why this is posting so late! I left you some homework down below. What did you see today?

« Routines
A Purpose and Distinction for Living (January 4) »